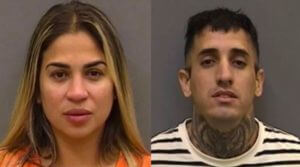 Sheriff’s officials said they were tipped off last week by a woman who said she had been smuggled into the country from Cuba, who said her smugglers demanded payment for her entry.

The tipster said the traffickers made threats against the woman and her family, and that if her debt was not repaid, she would be forced to work in the sex trade until her financial obligation was met.

Hillsborough County detectives then set up a surveillance operation, which revealed a total of eight women, aged 19-24, were forced to work as prostitutes and other sex workers.

According to HCSO, seven of the victims were seen being escorted by one of their traffickers to the International Mall on Thursday, which is where undercover detectives made contact.

The women were rescued and Garcia and Maqueira were arrested.

A search warrant was issued for two properties where the victims were reportedly being held. An investigation is ongoing.

This story was originally published Oct. 24 by WFTX in Fort Myers, an E.W. Scripps Company.