Deputies responded to a home in the 500 block of Cherry Road just after 8:30 p.m. because of reports of a domestic dispute. 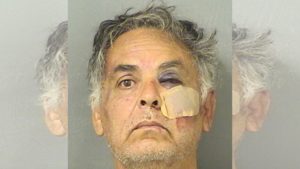 When they arrived, deputies found Guillermo Silva being held down by an unnamed victim, according to a probable cause affidavit.

During a sweep of the home, deputies also found a man dead in the living room on his back with severe blunt force trauma to his face.

A woman’s nude body was located in Silva’s bedroom on a bed on her knees with a laceration to her back along with severe blunt force trauma on her torso, arm and face.

Investigators determined the cause of both deaths was from an apparent homicide.

Silva was taken to JFK Medical Center by Palm Beach County Fire Rescue where he was treated for minor injuries from an altercation with the unnamed victim before deputies arrived.

The unnamed victim who survived the incident later told detectives that he arrived at the home to bring money to the two deceased individuals to help them pay their bills.

However, when he arrived at the home he attempted to call one of the victims but was unsuccessful. When he honked his vehicle, he said Silva exited the home.

The unnamed victim asked Silva if the two people that he was looking for were inside. Silva said they were and directed him to enter the home through a side door.

When he entered the home, he said Silva approached from behind, held a large kitchen knife to his neck and threatened, “I’m going to f**king kill you!”

However, the man told detectives that he was able to overpower Silva, push the knife away, disarm him and hold him down.

He said Silva then made several spontaneous utterances including, “Please forgive me … I killed them … They’re dead … Kill me!”

The unnamed victim said he called another family member asking him to help him before calling 911.

The unnamed victim told detectives that Silva had been married to an individual — whose name is redacted in the affidavit — for about a year. He said all of the woman’s children were currently out of the country, except one, which was left in the care of Silva.

The unnamed family member told detectives that he arrived at the home after receiving the phone call to retrieve the child.

Once Silva was medically cleared, he was taken to a Palm Beach County Sheriff’s Office substation in Greenacres to be interviewed.

Silva told detectives that he was drinking alcohol earlier in the day, which led to a verbal argument with both victims before he went to sleep.

The suspect said he was later awakened in the evening by the unnamed victim, who was looking for the other two victims.

Silva said he could not remember what started the altercation but said was attacked by the unnamed victim. He said he did not recall killing either of the two victims nor did he recall threatening to kill the unnamed victim with a knife.

However, Silva advised that he did recall that the female victim was naked in his bedroom at some point in the evening but could not recall the circumstances.

The probable cause affidavit did not elaborate on a possible motive for the killings.

Silva faces two counts of second-degree murder and one count of aggravated assault with a deadly weapon.

This story was originally published July 6 by WPTV in West Palm Beach, an E.W. Scripps Company.