WEST PALM BEACH, Fla. (WPTV) — A Florida man was found guilty of first-degree murder on Friday after prosecutors said he hired a hitman to gun down his pregnant wife five years ago.

Jurors started deliberating the fate of Euri Jenkins, 35, Thursday afternoon, then returned at 9 a.m. Friday and met for about an hour before reaching a verdict. 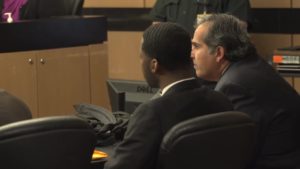 Euri Jenkins sits with one his attorneys in a Palm Beach County courtroom as he listens to the verdict in his murder trial, May 6, 2022, in West Palm Beach, Fla. (WPTV)

Prosecutors said Jenkins hired hitman Joevan Joseph, 24, to shoot and kill Makeva Jenkins, 33, while she was sleeping in her bed in the couple’s Lantana home in June of 2017.

During closing arguments Thursday, the state argued Jenkins was the mastermind behind the shooting and wanted his wife dead so he could collect her life insurance money.

“This has been a long struggle for me. And what has happened to my daughter has affected my life and the life of my family,” Gloria Harold, Makeva Jenkins’ grandmother, said in court Friday.

Harold told Judge Kirk Volker and the court she has “nothing bad” to say about Euri Jenkins and that all she wanted was justice for her granddaughter.

“Nobody wins in this case,” Harold said, fighting back tears. “They came to the verdict I wanted them to have. But on neither side was a winner.”

During Jenkins’ trial, which lasted about a week, the state’s key witnesses — Joseph and alleged middleman Dametri Dale — testified against Jenkins to avoid life sentences.

However, Jenkins’ defense team tried to argue that both men have a history of lying under oath. 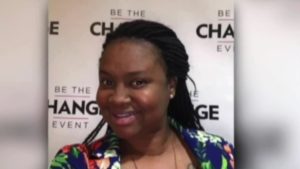 Makeva Jenkins, 33, who was shot and killed in her Lantana home in June 2017. (Photo provided by family via WPTV)

“I think we are shocked by the outcome,” defense attorney Gregg Lerman said Friday. “These two witnesses, cooperating defendants, are the ones who committed this crime, caused it to happen, took the stand and perjured themselves. It’s unquestionable that one or both of them lied a number of times about material issues, and individuals simply shouldn’t be convicted based on knowingly perjured testimony that the government puts up.”

This story was originally published May 6 by WPTV in West Palm Beach, an E.W. Scripps Company.