During a press conference, Sheriff Chad Chronister said 64-year-old Thomas Schultz called 911 shortly after 6 a.m. from his home in the 13000 block of Graham Yarden Drive. 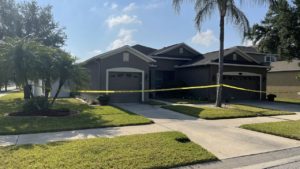 While on the phone, Schultz told the dispatcher, “We are in an impossible situation with no way out. Please send someone to secure the residence.”

As the dispatcher tried to talk with Schultz he told her “I have to go, I’m fixing to shoot myself.”

Sheriff Chronister said both Schultz’s wife and his step-daughter were suffering from terminal illnesses.

“With May being Mental Health Awareness Month, we’re reminding everyone that there is no such thing as an impossible situation with no way out,” Sheriff Chronister said. “There is always hope. There is always help. Here in the Tampa Bay area, we have such wonderful resources. Some as easy as picking up the phone and calling the Crisis Center of Tampa Bay by simply dialing 211.”

“It’s heartbreaking to know that anyone could get to that level of hopeless and that level of feeling alone and unsupported,” Natasha A. Pierre, a mental health advocate, said. “We can only imagine the weight of supporting and caring for two people who are terminally ill when you’re later in life.”

Pierre said now is the time, during Mental Health Awareness Month, to check on loved ones and neighbors to show them someone cares.

“All I can tell people is you’re not alone. Even when you think you’re the only person experiencing whatever your situation is, just reach out one more time,” Pierre said. “Maybe that’s the one time that’s going to be the breakthrough for you.”

Chronister added the phone call was extremely difficult for the dispatcher who spoke with Schultz because she just lost a family member to suicide.

This story was originally published May 18 by WFTS in Tampa, an E.W. Scripps Company.