NEW YORK (AP) — Two Washington Post reporters are working on a biography of George Floyd, from his family history in the tobacco fields of North Carolina to his murder last year in Minneapolis by a white police officer. 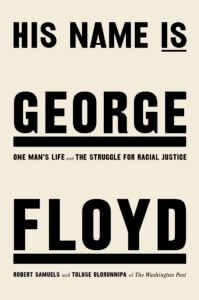 This cover image released by Viking shows ” “His Name Is George Floyd; One Man’s Life and the Struggle for Racial Justice” by Robert Samuels and Toluse Olorunnip. (Viking via AP)

Viking announced Wednesday that “His Name Is George Floyd: One Man’s Life and the Struggle for Racial Justice,” by Robert Samuels and Toluse Olorunnipa, will come out next May, nearly two years to the day of Floyd’s death.

The book expands upon the Post’s six-part series “George Floyd’s America,” winner of a Polk award for justice reporting.

“George Floyd’s gruesome, videotaped death changed the world, as millions were moved by the raw humanity of a dying man pleading for air,” Olorunnipa said in a statement. “As we’ve examined his life over the past year, we’ve learned how his struggle to exhale as a Black man in America began decades before a police officer’s knee landed on his neck.”