BRUNSWICK, Ga. (AP) — A judge said Thursday he will review under seal mental health records of Ahmaud Arbery to decide whether they can be used by defense attorneys to support their case that the slaying of the 25-year-old Black man was an act of self-defense.

Superior Court Judge Timothy Walmsley declined to hear from an expert witness that defense lawyers plan to use to discuss Arbery’s mental health at trial until the judge rules on whether the records can be admitted into evidence. He ordered those documents to be sealed, meaning they won’t be part of the public case record.

Travis McMichael and his father, Greg McMichael, armed themselves with guns and pursued Arbery in a pickup truck when they spotted him running in their coastal Georgia neighborhood Feb. 23, 2020. A neighbor, William “Roddie” Bryan, joined the chase and took cellphone video of Travis McMichael shooting Arbery three times at close range with a shotgun.

During pretrial hearings Wednesday and Thursday, defense attorneys pressed the judge to allow unflattering evidence from Arbery’s past and issues involving his mental health in an effort to counter prosecutors’ contention that Arbery was an innocent jogger who was unjustly chased and killed by white men.

They want the trial jury to hear about prior encounters Arbery had with police, including arrests for bringing a gun onto a high school campus in 2013 and for shoplifting in 2017, as well as evidence of mental illness to support defense attorneys’ argument that Travis McMichael killed Arbery in self-defense.

Prosecutors have asked the judge to keep all of that out of the upcoming trial, saying it’s irrelevant because none of the defendants knew Arbery before the fatal chase. They also contend any records dealing with Arbery’s mental health are protected by law as private medical information.

“They’re claiming self-defense against a man they did not know, a man they saw running down the street,” prosecutor Linda Dunikoski told the judge Thursday. “When they said, ‘I was acting reasonably,’ that has nothing to do with Mr. Arbery’s mental health. It is not critical to their defense.”

Defense attorneys say the McMichaels suspected Arbery was a burglar who had been recorded entering a nearby home under construction and they were trying to detain him until police could arrive. They say Travis McMichael shot him at close range when Arbery attacked and tried to grab his shotgun.

Jason Sheffield, a lawyer for Travis McMichael, told the judge that his client’s right to a robust defense should trump concerns for Arbery’s medical privacy. He said the mental health evidence was “paramount” to the defense case.

“It is reckless to disregard the mental health illness that plagued him for three years leading up to this moment in February 2020,” Sheffield said.

Arbery’s parents have likened the defense’s focus on his past and mental health to an effort to put their son on trial. His mother, Wanda Cooper-Jones, said she still feels like the case is “moving closer to justice.”

“I just want this to be all over so Ahmaud can continue to rest in peace,” Cooper-Jones told reporters Thursday.

“I’m going to have a battle of experts in front of a jury, in a murder trial, about what the mental health of the victim meant,” Walmsley said. 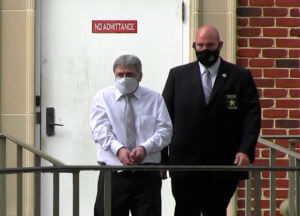 In this image from video, Roddy Bryant, accused in the slaying of Ahmaud Arbery, is led by security officers from the Glynn County Courthouse in Brunswick, Ga., Wednesday, May 12, 2021. A Georgia judge will continue hearing legal motions Thursday in the murder case of three men facing a fall trial in the slaying of Arbery, a Black man who was chased and shot after being spotted running in the defendants’ neighborhood. (AP Photo/Lewis M. Levine)

Defense attorneys Thursday also asked the judge to keep recordings of the defendants’ phone calls from jail out of their upcoming trial.

Prosecutors told Superior Judge Timothy Walmsley they have requested recordings of about 1,500 phone calls involving the McMichaels and Bryan since they were jailed a year ago. They did not say which, if any, they plan to use as trial evidence.

During the defendants’ bond hearing in November, prosecutors played a portion of a phone call made from the Glynn County jail between Greg McMichael and his brother. On the recording, Greg McMichael says: “You’ve heard the saying that no good deed goes unpunished?”

Greg McMichael’s attorney, Franklin Hogue, argued that using the calls at trial would violate the defendants’ due process rights. He said prosecutors at the bond hearing had misconstrued Greg McMichael’s comment to mean that “the good deed was killing Ahmaud Arbery,” when the deed he was referring to was keeping watch over his neighborhood.

Prosecutor Larissa Ollivierre said inmates have no right to privacy when speaking on jail telephones unless it’s with their attorneys. She noted the jail where the three defendants are being held doesn’t record calls with lawyers. All other calls begin with a message informing the inmates that they’re being recorded.

The judge didn’t rule on the issue in court.

The three men are scheduled to stand trial on charges of malice murder and other counts this fall, with jury selection beginning Oct. 18.

The case sparked a national outcry during a year of protests over killings of unarmed Black people. The Justice Department on April 28 added hate crime charges against the McMichaels and Bryan, who all pleaded not guilty to the federal counts before a U.S. magistrate judge Tuesday.