FORT LAUDERDALE, Fla. (AP) — A grieving father erupted in anger Tuesday as he told jurors about the daughter Florida school shooter Nikolas Cruz murdered along with 16 others four years ago, his voice rising as he recounted her “infectious laugh that I can only get to watch now on TikTok videos.”

Dr. Ilan Alhadeff’s emotional testimony about his 14-year-old daughter Alyssa marked a second day of tears as families, one after another, took the witness stand to give heartrending statements about their loved ones who died at Parkland’s Marjory Stoneman Douglas High School on Feb. 14, 2018.

He and his wife, Lori, described Alyssa’s role as captain of her soccer team, the friend others always turned to for advice or a shoulder to cry on, and her plans to become a business lawyer. He cried as he recounted how he will not dance with his daughter at her wedding or see the children she would have had.

“My first-born daughter, daddy’s girl was taken from me!” yelled Alhadeff, an internal medicine physician. “I get to watch my friends, my neighbors, colleagues spend time enjoying their daughters, enjoying all the normal milestones, taking in the normal joys and I only get to watch videos or go to the cemetery to see my daughter.”

He said one of Alyssa’s two younger brothers was too young to comprehend her death when it happened, but now “asks to go see his sister at the cemetery from time to time.”

“This is not normal!” he said angrily.

Cruz, 23, pleaded guilty to 17 counts of first-degree murder in October; the trial is only to determine whether he is sentenced to death or life without parole. Over the two days of family statements, he has shown little emotion, even as several of his attorneys wiped away tears and Circuit Judge Elizabeth Scherer’s voice broke when she gave directions. He mostly stares straight ahead or looks down at the table where he sits. 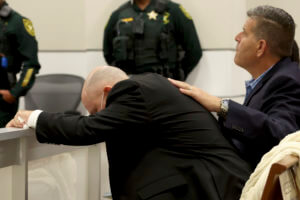 Ilan Alhadeff is comforted as he returns to his seat after giving his victim impact statement during the penalty phase of the trial of Marjory Stoneman Douglas High School shooter Nikolas Cruz at the Broward County Courthouse in Fort Lauderdale on Tuesday, Aug. 2, 2022. Alhadeff’s daughter, Alyssa, was killed in the 2018 shootings. Cruz previously plead guilty to all 17 counts of premeditated murder and 17 counts of attempted murder in the 2018 shootings. (Amy Beth Bennett/South Florida Sun Sentinel via AP, Pool)

As one family testifies, others sob in the gallery while awaiting their turn. When finished, they stay to lend support. They exchange packets of tissues, shoulder rubs and, when breaks come, hugs. Some jurors wipe away tears, but most sit stoically.

Some families had statements read for them. The mother of 14-year-old Martin Duque wrote that while he was born in Mexico, he wanted to become a U.S. Navy Seal. The wife of assistant football coach Aaron Feis wrote that he was a doting father to their young daughter and a mentor to many young people.

The mother of 16-year-old Carmen Schentrup wrote that she was a straight-A student whose letter announcing she was a semifinalist for a National Merit Scholarship arrived the day after she died. She wanted to be a doctor who researched amyotrophic lateral sclerosis, commonly known as Lou Gehrig’s disease.

Shara Kaplan sobbed as she told the jurors of her two sons’ sadness that they weren’t there to protect their little sister, 18-year-old Meadow Pollack.

Luke Hoyer’s mom, Gina, said the 15-year-old was her “miracle baby,” her “Lukey Bear.” She said he yelled down that Valentine’s Day morning to thank her for the card and Skittles she’d placed in his bathroom. The gifts stayed there for a year. His father, Tom, said he never saw his son that morning, but yelled up “Have a good day” as he hurried to work. “That is the kind of exchange you have when you think you have tomorrow,” he said.

Fred Guttenberg, who has become a national advocate for tighter gun laws, said he regrets that the last words he said to his 14-year-old daughter Jaime weren’t “I love you” but instead, “You gotta go, you are going to be late” as he pushed her and her older brother out the door that morning. He said his son is angry with him for telling him to run when he called in a panic to say there was a gunman at the school instead of having him find his sister, even though it would have made no difference.

His wife, Jennifer Guttenberg, said that while her daughter was known for her competitive dancing, she volunteered with the Humane Society and with special needs children. She planned to be a pediatric physical therapist. 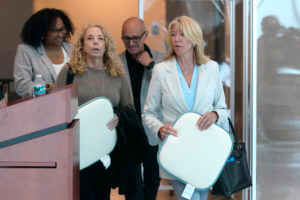 Annika Dworet, her husband Mitch sitting somberly at her side, told the jurors about their son Nick, who was 17 when he died. A star swimmer, he had accepted a scholarship to the University of Indianapolis and was training in hopes of competing for his mother’s native Sweden in the 2020 Olympics. His younger brother, Alex, was wounded in the shooting.

“He was always inclusive of everyone. On his last evening with us, he spent time speaking to the younger kids on the swim team, giving them some pointers,” she said.

But now, she said, “our hearts will forever be broken.”

“We will always live with excruciating pain. We have an empty bedroom in our house. There is an empty chair at our dining table. Alex will never have a brother to talk or hang out with. They will never again go for a drive, blasting very loud music. We did not get to see Nick graduate from high school or college. We will never see him getting married.

“We will always hesitate before answering the question, ‘How many kids do you have?’” 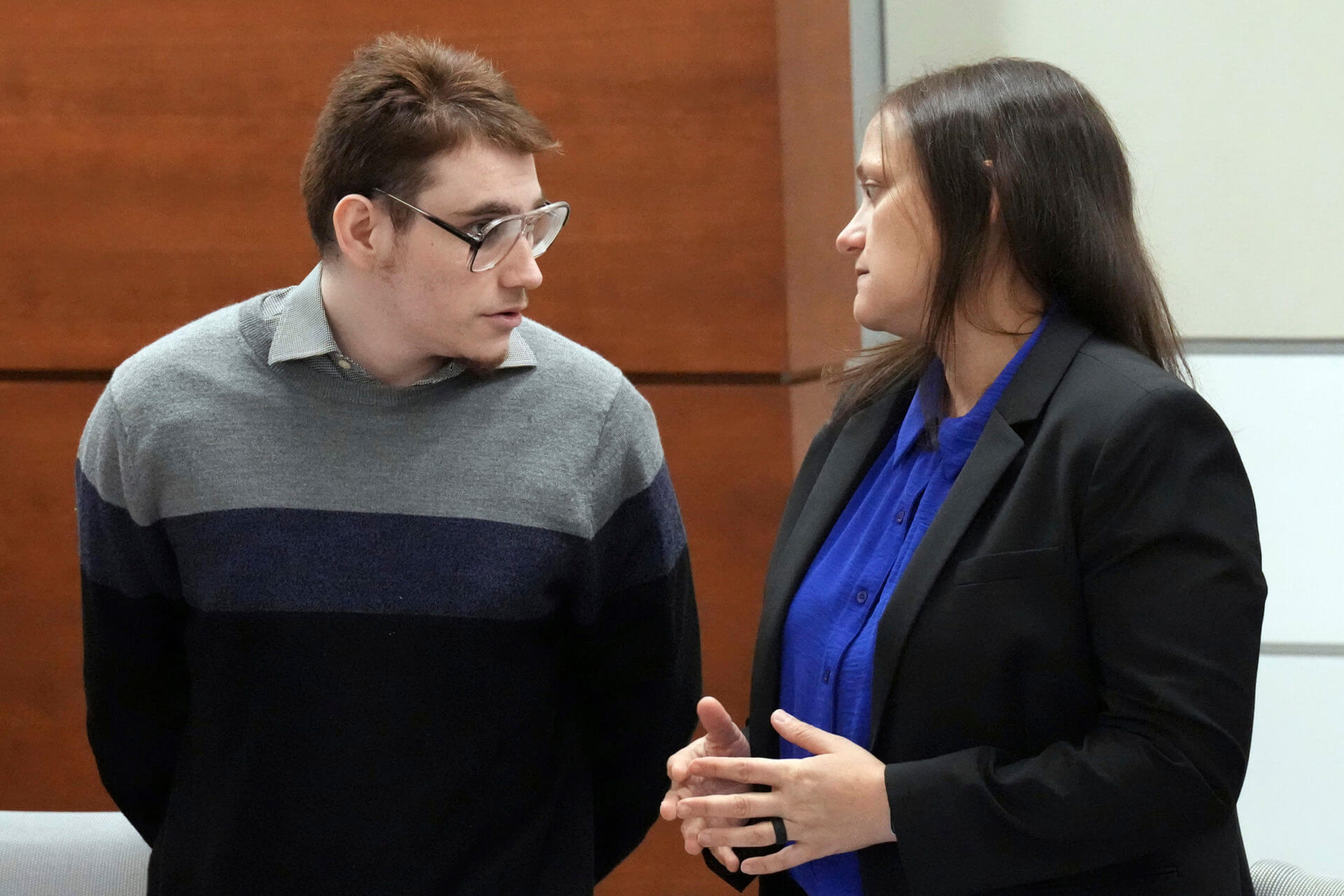