STUART, Fla. (WPTV) — A handyman accused of killing a Florida woman and then hiding her body in a septic tank has pleaded guilty to murder and will spend the rest of his life in prison.

Keoki Demich, 34, was sentenced to three consecutive life terms Tuesday for the murder of Cynthia Cole earlier this year. 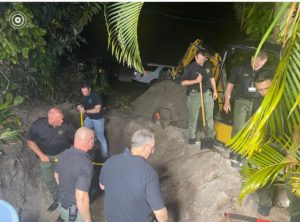 By pleading guilty, prosecutors agreed to waive their notice to seek the death penalty.

Demich will serve three life sentences for first-degree murder, burglary of an occupied dwelling with assault or battery and sexual battery. He was also convicted of third-degree grand theft and grand theft of a motor vehicle.

Cole’s body was found March 5 submerged in the septic tank — about 4 feet underground — after hours of excavation.

The 57-year-old woman had been missing for more than a week after attending the Jammin’ Jensen event in downtown Jensen Beach.

Demich was a longtime handyman for Cole.

According to court documents, Demich hid inside Cole’s shower while waiting for her to return home.

Records show he attacked her, drowned her inside her bathtub and then proceeded to sexually abuse her before burying her inside the septic tank.

The sheriff said Cole and Demich had known each other for years.

This story was originally published Aug. 17 by WPTV in West Palm Beach, an E.W. Scripps Company.