WASHINGTON (AP) — The Supreme Court is taking up a dispute over a blocked Biden administration policy that would prioritize deportation of people in the country illegally who pose the greatest public safety risk.

Republican-led states sued and won a nationwide court order that is meant to limit immigration officers’ discretion in deciding whom to deport. The justices are hearing arguments in the case Tuesday. 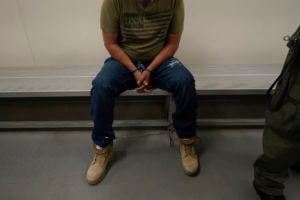 FILE – An immigrant considered a threat to public safety and national security waits to be processed by U.S. Immigration and Customs Enforcement agents at the ICE Metropolitan Detention Center in Los Angeles, after an early morning raid, June 6, 2022. The Supreme Court is taking up a dispute over a blocked Biden administration policy that would prioritize deportation of people in the country illegally who pose the greatest public safety risk. (AP Photo/Damian Dovarganes, File)

It’s the latest example of a Republican litigation strategy that has succeeded in slowing Biden administration initiatives by going to GOP-friendly courts.

In a separate ongoing legal dispute, three judges chosen by President Donald Trump are among the four Republican-appointed judges who have so far prevented the administration’s student loan cancellation program from taking effect.

At the center of the immigration legal fight is a September 2021 directive from the Department of Homeland Security that paused deportations unless individuals had committed acts of terrorism, espionage or “egregious threats to public safety.”

The guidance, issued after Joe Biden became president, updated a Trump-era policy that removed people in the country illegally regardless of criminal history or community ties.

The administration said in a written high-court filing that the “decision to prioritize threats to national security, public safety, and border security was both reasonable and reasonably explained,” especially since Congress has not given DHS enough money to vastly increase the number of people it holds and deports.

Texas and Louisiana, which sued over the directive, responded that the administration’s guidance violates federal law that requires the detention of people who are in the U.S. illegally and who have been convicted of serious crimes.

The states said they would face added costs of having to detain people the federal government might allow to remain free inside the United States, despite their criminal records.

The federal appeals court in Cincinnati earlier overturned a district judge’s order that put the policy on hold in a lawsuit filed by Arizona, Ohio and Montana.

But in a separate suit filed by Texas and Louisiana, a federal judge in Texas ordered a nationwide halt to the guidance and a federal appellate panel in New Orleans declined to step in.

In July, the court voted 5-4 to leave the immigration policy frozen nationwide. Conservative Justice Amy Coney Barrett joined the court’s three liberals in saying they would have allowed the Biden administration to put in place the guidance.

At the same time, the court said it would hear arguments in the case in late November.