CHULA VISTA, Calif. (KGTV) — The husband of Maya Millete, the California woman who was reported missing last month, has retained a lawyer and is no longer cooperating with Chula Vista police, authorities said Wednesday.

Millete’s husband, Larry, is no longer fielding questions or requests from police, said Chula Vista police Lt. Miriam Foxx. The mother of three was last seen at her Chula Vista home on Jan. 7, her family said. She was reported missing on January 10. 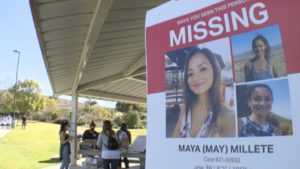 The search continues for the missing Chula Vista mom. Photo by: Will Giron / KGTV

KGTV was able to reach Larry on Wednesday night. He said that he retained an attorney based on the advice from family and is grateful for the investigator’s efforts and the community to help find Millete, adding that he would like the focus to remain on finding her.

Last month, police interviewed Millete’s husband, who said he last saw her at home on Jan. 7.

Millete’s sister, Maricris Drouaillet, also spoke with KGTV Wednesday night. Drouaillet says the police department called her family Wednesday, requesting to meet with them. During the meeting, they were told Larry had hired an attorney. Maricris says the family was surprised and hurt by the news. The family says they still have many unanswered questions, but their focus is still on finding Millete.

Detectives previously said the couple had marital problems and that they had no leads or any indication of foul play. Police previously said Larry was cooperating with their investigation.

Millete’s car is still at her Chula Vista home. There has been no activity on her bank statements, and her phone goes straight to voicemail. Friday, the family will host a peaceful rally at the Chula Vista Police Department, hoping to push investigators to release more information.

This article was written by Krista Summerville, Laura Acevedo for KGTV.