BOISE, Idaho (AP) — Idaho Police investigating the stabbing deaths of four University of Idaho students say they’re working with law enforcement in Eugene, Oregon, to determine if a white sedan that was found on the side of the road there is related to the Idaho case. 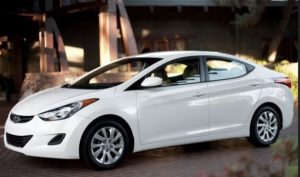 Detectives are interested in speaking with the occupant(s) of a white 2011-2013 Hyundai Elantra, with an unknown license plate. Tips and leads have led investigators to look for additional information about a vehicle being in the immediate area of the King Street residence during the early morning hours of November 13th. Investigators believe the occupant(s) of this vehicle may have critical information to share regarding this case. (Moscow Police Department)

Relatively few details have been released about the homicides of Madison Mogen, Kaylee Goncalves, Xana Kernodle and Ethan Chapin. The four friends’ bodies were found Nov. 13 at a rental home across the street from the university campus, and the killings have left the small town of Moscow, Idaho deeply shaken.

The Moscow Police Department is working through nearly 12,000 email and phone tips, the department said in a press release Tuesday, as well as more than 4,500 digital media submissions including surveillance camera footage. Investigators are also still looking for any information about a white 2011-2013 Hyundai Elantra that was seen near the rental home around the time the students were killed.

“Investigators believe the occupant(s) may have critical information to share regarding this case and have identified over 22,000 vehicles,” the department wrote in the news release. “If you know of, or own, a vehicle matching this description, or know of anyone who may have been driving this specific vehicle on the days preceding or the day of the murders, please forward that information to the Tip Line.”

The case has drawn massive interest from true crime aficionados and online would-be sleuths, and in recent days many online forums dedicated to the case have focused on images of a Hyundai Elantra found abandoned on the side of the road in Eugene, Oregon, after a collision. 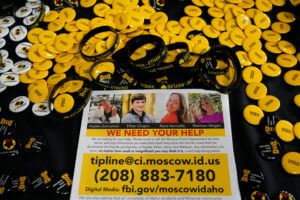 FILE – A flyer seeking information about the killings of four University of Idaho students who were found dead is displayed on a table along with buttons and bracelets on Nov. 30, 2022, during a vigil in memory of the victims in Moscow, Idaho. Idaho Police investigating the stabbing deaths of the students say they’re working with law enforcement in Eugene, Ore., to determine if a white sedan found on the side of the road there is related to the Idaho case. (AP Photo/Ted S. Warren, File)

On Tuesday, the Moscow Police Department confirmed that investigators were aware of the car and were “working with the local jurisdiction to determine if the vehicle is related to our case.”

Melinda McLaughlin, a spokesperson for the Eugene Police Department, wrote in a text message that somebody called 911 on Dec. 17 to report that a person was sleeping inside a Hyundai Elantra.

Officers responded and made contact with the person, and no further report was made, McLaughlin wrote. The vehicle had been there since Dec. 15 when it was left after an injury crash.

“We have no information to indicate it is related to the Moscow, Idaho case,” McLaughlin wrote. “However, they were sent the vehicle information so they have it to review.”