MOSCOW, Idaho (KIVI) — It’s been one month since four University of Idaho students were murdered in the middle of the night in their off-campus home. Moscow Police continue working closely with the FBI but still have not made any arrests or identified a suspect.

The department has not hosted an in-person media briefing since November 23, instead posting pre-produced video updates on its YouTube channel since then.

In the latest video release, Tuesday, Captain Roger Lanier reflects on the last month of the investigation, saying the general public “has no idea of the scope of this investigation” and the number of people involved from multiple agencies across the region.

Lanier reflected on the phone call he received on November 13th first notifying him of the quadruple homicide. “It took me a second. I really had to think about what I had just heard,” the captain said. “Four murders in Moscow, Idaho is so out of character.”

Captain Lanier said it quickly turned into an all-hands-on-deck moment at the department that Sunday afternoon.

“It became fairly apparent when I got to the scene, that we were going to need resources outside of what the Moscow Police Department could provide,” Lanier said. Moscow PD has been working closely with the FBI and Idaho State Police since the start of the investigation.

Captain Lanier said the crime scene was incredibly somber as friends and family members started arriving at the scene trying to figure out who the victims were. 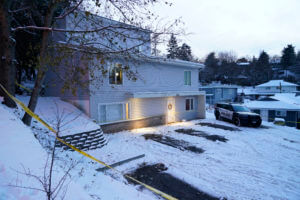 FILE – Bare spots are seen on Nov. 29, 2022, in the snowy parking lot in front of the home where four University of Idaho students were found dead on Nov. 13, in Moscow, Idaho, after vehicles belonging to the victims and others were towed away earlier in the day. Police are asking for help finding the occupant of a car that was seen near where the students were stabbed, saying that person could have “critical information” about the case. (AP Photo/Ted S. Warren, File)

“It was also really, really hard on our officers, some of whom are very young and that was the first real major crime scene they had encountered,” Lanier said. “So emotionally, it was a very, very draining day.”

Captain Lanier said the first three days of the investigation focused around getting resources in place as multiple agencies had to get efficient systems in order to properly share information with one another. “Once everything was in place, it became a very systematic method of processing information that was coming in,” Lanier said.

Investigators are well aware of the growing online community invested in this investigation, stirring up speculation and rumors while waiting for official updates from police.

“That’s been by far the most frustrating part of this,” Lanier said. “We’ve always closely guarded the information we’ve discovered at the scene and our investigative information because we want to protect the integrity of the investigation.”

Lanier says it then impacts tips they receive from the community, as information starts pouring in in response to online rumors instead of factual information vetted by officers.

“The really unfortunate part of it is the effect it’s had on the victims’ families, on the college students and friends of the victims, some of whom have had death threats and constant harassment,” Lanier said. “So it’s been devastating in some ways; in many ways, it just revictimizes folks who have already suffered this terrible trauma.”

Captain Lanier emphasizes this is not a cold case, and instead a very active investigation. Police are still asking for tips regarding a white 2011-2013 Hyundai Elantra believed to be near the crime scene around the time of the crime.

“Every single day, we get a good amount of viable tips, and those tips help us do everything from clear people who maybe there was some speculation about, to further some of the theories that we’re working on,” Lanier said. “Eventually, we will narrow in on what happened and who did it.”

This story was originally published Dec. 13 by KIVI in Boise, an E.W. Scripps Company.