IOWA CITY, Iowa (AP) — The man on trial for the 2018 abduction and stabbing death of a University of Iowa student claimed for the first time Wednesday that two masked men were responsible for the crime but forced him to take part at gunpoint.

In a surprise development, the defense called Cristhian Bahena Rivera as a witness at his first-degree murder trial. He admitted that his black car was the one seen on surveillance video circling Mollie Tibbetts while she was jogging in Brooklyn, Iowa, on July 18, 2018. He also acknowledged that she ended up in his car’s trunk, that he hid her body in a cornfield and that he told investigators where to find it a month later.

But the farm laborer presented a far different narrative about what happened than prosecutors did, denying that he was responsible for the stab wounds to Tibbetts’ head, neck and chest that caused her death.

Bahena Rivera said two armed men who were wearing black and had their faces covered by stocking caps showed up at his trailer after he finished showering that evening. The men directed him to get in his car and drive, and they passed Tibbetts as she ran several times before directing him to stop, he said.

Bahena Rivera, 26, said a man with a knife got out of the car and walked down the rural road. The man was gone for about 10 minutes as the second man in the back seat of the car grew nervous, saying, “Come on, Jack,” he claimed.

The defendant said he didn’t know the men’s identities, but his lawyers have tried to raise suspicions about Tibbetts’ boyfriend, Dalton Jack, who admitted to an affair with another woman and past anger problems. Police said they cleared Jack as a suspect after establishing he was out of town for work that day.

Bahena Rivera said the men loaded something into his trunk, directed him to drive several miles to a rural area, turn off the car, wait a few minutes and leave. They said they knew his ex-girlfriend and young daughter, and that they would harm them if he ever told anyone what happened, he said. 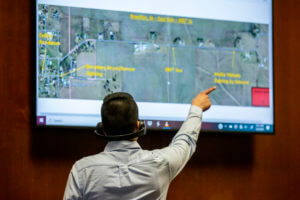 Cristhian Bahena Rivera testifies from the witness stand, on Wednesday, May 26, 2021, in the Scott County Courthouse, in Davenport, Iowa. Bahena Rivera is on trial after being charged with first degree murder in the death of Mollie Tibbetts in July 2018. (Pool Photo/Kelsey Kremer/Des Moines Register)

Bahena Rivera said the men took off on foot down the road and he never saw them again. He said he opened the trunk a few minutes later and found Tibbetts’ body, which he said was heavy as he carried it to the cornfield.

He said he covered her body with corn stalks because “I didn’t want her to be too exposed to the sun,” and that he then left and never planned to discuss what had happened again. Bahena Rivera said he left Tibbetts’ phone, Fitbit and earbuds on the side of the road.

Bahena Rivera said he wasn’t truthful when detectives began questioning him about Tibbetts’ disappearance on Aug. 20, 2018, because he was worried about his daughter’s safety. Back then, he said he had approached Tibbetts as she ran, fought with her after she threatened to call police and then “blacked out” before hiding her body.

He said he agreed to lead investigators to Tibbetts’ body early the next day because he was tired and wanted the interrogation to end. And he said police had urged him to “put myself in the family’s position and to think of” how he would feel if his daughter was missing.

Bahena Rivera recounted growing up poor in southern Mexico and illegally coming to the U.S. after he turned 17, crossing a river into Texas on an inflatable raft with about 10 other people. He immediately went to live in Iowa, where his father’s brothers had settled, and got a job within days milking cows at a dairy farm, he said.

Bahena Rivera, who has been jailed since his August 2018 arrest, said he worked 12-hour days and was careful to avoid police for fear of deportation. He said never had contact with law enforcement until investigators looking into Tibbetts’ disappearance identified his vehicle on a homeowner’s surveillance video on her running route.

Most legal experts had not expected Bahena Rivera to testify. His lawyer Chad Frese said during jury selection that he was torn on whether to call his client as a witness. He said that if Bahena Rivera didn’t testify, it would look like he had something to hide, but that if he did, he might be seen as trying to save himself.

Jurors perked up when Bahena Rivera took the witness stand and prosecutors furiously took notes while he testified. Bahena Rivera showed little emotion, but his voice dropped and slightly trembled as he discussed the men’s alleged threats to his daughter.

The defense rested its case later Wednesday. Closing arguments in the weeklong trial at the Scott County Courthouse in Davenport were scheduled for Thursday. Bahena Rivera faces life in prison if he’s convicted.