Jackson wrote that she would have thrown out lower court rulings in the case of inmate Davel Chinn, whose lawyers argued that the state suppressed evidence that might have altered the outcome of his trial. 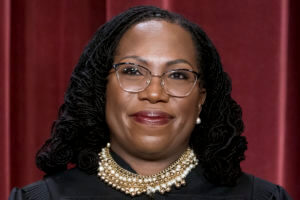 Jackson, in a two-page opinion, wrote that she would have ordered a new look at Chinn’s case “because his life is on the line and given the substantial likelihood that the suppressed records would have changed the outcome at trial.”

The evidence at issue indicated that a key witness against Chinn has an intellectual disability that might have affected his memory and ability to testify accurately, she wrote.

Prosecutors are required to turn over potentially exculpatory evidence to the defense. In this case, lower courts determined that the outcome would not have been affected if the witness’ records had been provided to Chinn’s lawyers.

Justice Sonia Sotomayor was the only other member of the court to join Jackson’s opinion. The two justices also were allies in dissent Monday in Sotomayor’s opinion that there was serious prosecutorial misconduct in the trial of a Louisiana man who was convicted of sex trafficking.

The court has yet to decide any of the cases argued in October or the first few days of this month. Jackson almost certainly will be writing a majority opinion in one of those cases.