MADISON, Wis. (AP) — A judge on Thursday refused prosecutors’ request to issue a new arrest warrant for an 18-year-old from Illinois accused of killing two people during a police brutality protest in Wisconsin last summer.

Kenosha County Assistant District Attorney Thomas Binger alleged that Kyle Rittenhouse failed to update his address when he moved out of his Antioch apartment in November, amounting to a bail violation. 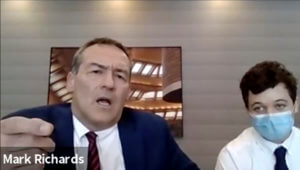 In addition to a new arrest warrant, Binger asked Judge Bruce Schroeder to increase Rittenhouse’s bail by $200,000. Rittenhouse’s attorneys countered that Rittenhouse is in hiding due to threats.

Schroeder refused both of Binger’s requests. During a testy hearing the judge said people out on bail often fail to update their addresses and aren’t arrested. He ordered Rittenhouse attorney Mark Richards to turn over Rittenhouse’s current physical address but said it would be sealed to the public and only he and the Kenosha County Sheriff’s Department would have access to it.

The judge refused to give Binger the address, saying he didn’t want more violence in Kenosha. The move — and the comment — left Binger flabbergasted.

“I hope you’re not suggesting sharing this with our office would lead to further violence,” Binger said. “We are not the public. We are the prosecuting agency. I have never heard of a situation where the information has been withheld from my office.”

Schroeder said the sheriff could handle any further bail violations. Binger countered that Rittenhouse doesn’t live in Kenosha County so the sheriff can’t touch him. Schroeder cut Binger off in mid-sentence and ended the hearing.

According to prosecutors, Rittenhouse, who is white, came to Kenosha on Aug. 25 to protect businesses as the city was in the throes of chaotic protests after a white police officer shot Jacob Blake, who is Black, in the back during a domestic disturbance. Rittenhouse was 17 at the time.

Rittenhouse faces multiple charges, including two homicide counts. He has argued he fired in self-defense after the protesters attacked him.

Black Lives Matter supporters have painted him as a trigger-happy white supremacist, but some conservatives see him as a symbol for gun rights and have rallied around him, generating $2 million for his bail in November.

Binger said he suspected that Rittenhouse had moved in November but it wasn’t confirmed until a hearing notice was returned as undeliverable in January and detectives subsequently found someone else living there.

Richards acknowledged that he should have updated the address but stressed that Rittenhouse has made every court appearance and isn’t a flight risk.

“We have nothing to fear,” Richards said. “The truth will set my client free.”

Last month, Rittenhouse was captured on video at a Wisconsin bar wearing a T-shirt that read “Free as (expletive),” drinking and flashing white supremacist signs. Five men serenaded with him a song that has become the anthem for neo-fascist group The Proud Boys. He could legally drink in the bar because he was with his mother.

Huber’s father, John, told the judge during the hearing that he thinks Rittenhouse’s bail should be set at $4 million.

“How would you feel if the killer of your son was just able to walk free and make videos in bars and just live it up?” he said.