WEST PALM BEACH, Fla. (WPTV) — A judge this week denied a request to modify the release conditions of a Florida teen accused of driving under the influence and causing a fatal crash that left six people dead earlier this year. 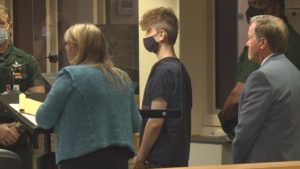 Noah Galle is accused of driving a BMW at 151 mph, crashing into an SUV, killing all six people inside. (WPTV)

Investigators said he was driving a BMW 151 mph on route 441 west of Delray Beach in January, when he rear-ended an SUV, killing six farmworkers.

Galle’s attorneys filed a motion in August claiming their client suffered, “medical issues or episodes that caused or contributed to the accident.”

His lawyers wanted his house arrest modified so he can see medical specialists in Boston.

According to Galle’s arrest report, he had previously posted on social media videos of himself speeding and offering a $25 reward for those who could guess his speed.

This story was originally published Sept. 9, 2022 by WPTV in West Palm Beach, an E.W. Scripps Company.