FORT LAUDERDALE, Fla. (AP) — In a failed attempt to bar the admission into evidence several swastikas Florida school shooter Nikolas Cruz drew on assignments, his attorneys made an unusual argument Thursday at his penalty trial: he was an equal opportunity killer who shot his victims without regard to race or religion.

The attorneys told Circuit Judge Elizabeth Scherer outside the jury’s presence that the Nazi symbol creates such strong anger and revulsion that allowing the panel to see those drawings violates his right to a fair trial because there is no evidence that his 2018 murder of 17 people at Parkland’s Marjory Stoneman Douglas High was driven by bigotry. Those killed and the 17 wounded included white, Black, Hispanic and Asian people, Christians and Jews.

They also listed the numerous times they asked Scherer before jury selection to rule on whether the swastikas would be admitted, saying her failure affected the questions they asked prospective jurors and their trial strategy. They asked for a mistrial, which Scherer angrily rejected, calling their argument “disingenuous.” 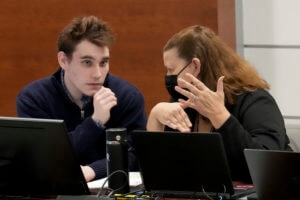 She and prosecutors pointed out that the defense was not against admitting drawings Cruz made that included a gross slur used against Black people, which they said is equally offensive. The 12 jurors and 10 alternates include people who are white, Black, Asian and Hispanic.

Cruz, 23, pleaded guilty in October; the trial will only determine whether he is sentenced to death or life without parole. The jury must be unanimous to impose a death sentence.

His public defenders are in their second week of presenting testimony about Cruz’s troubled life — from his birth to a crack-addicted, hard-drinking prostitute who put him up for adoption to a childhood filled with emotional and psychological problems that witnesses said were never adequately addressed.

Their strategy is aimed at counteracting the emotional, gruesome and graphic evidence and testimony the prosecution presented over three weeks as it laid out the killings and how Cruz planned the attack.

The swastikas were drawn on English assignments presented by the defense — they wanted the symbols blacked out while maintaining other troubling drawings they contained. After Scherer rejected the lawyers’ attempt to redact the swastikas, they still presented the assignments. The jury saw the swastikas, but neither side singled them out. 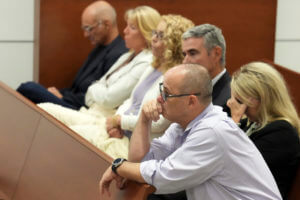 Fred Guttenberg is shown in the courtroom gallery with other family members of the victims as the defense moves for a mistrial during the penalty phase of the trial of Marjory Stoneman Douglas High School shooter Nikolas Cruz at the Broward County Courthouse in Fort Lauderdale, Fla., Thursday, Sept. 1, 2022. Guttenberg’s daughter, Jaime, was killed in the 2018 shootings. Cruz previously plead guilty to all 17 counts of premeditated murder and 17 counts of attempted murder in the 2018 shootings. (Amy Beth Bennett/South Florida Sun Sentinel via AP, Pool)

The assignments were given by Carrie Yon, who taught Cruz in eighth grade at Westglades Middle School four years before the shooting. Cruz had been in special education classes for his behavior problems, but was now being allowed into some mainstream classes like Yon’s.

Yon testified Thursday she usually returned a student’s material, but kept Cruz’s because she wanted to document his behavior thinking it might be needed at some point. She also made contemporaneous notes. She turned the material over to the lawyers after the shootings.

On assignments shown in court Thursday, Cruz wrote obscenities and gay slurs and drew photos of stick figures shooting each other and having sex. He once wrote to Yon, “I hate you. I hate America.”

She said Cruz would yell in class, flash his middle fingers, throw objects and make threats. He once told her “You better give me a good grade on this assignment” and another time lunged at her and then laughed. He hit other children during one fire drill and ran into the street in another, almost getting struck by a car.

She tried working with Cruz by giving him candy and compliments when he behaved. One time, she praised him for doing his assignment, telling him she knew he could be a good student. He replied, “I’m a bad kid. I want to kill.”

On one assessment, Yon wrote, “I strongly feel Nikolas is a danger to the students and faculty at this school. He does not understand the difference between his violent feelings and reality.”

She said she originally thought Cruz wanted attention from teachers and other students, but eventually believed he wanted to get kicked out of Westglades because he had no friends and couldn’t do the work.

She frequently complained about Cruz to administrators and showed them his assignments, but some were not helpful. She said one told her, “He has a right to an education. He has a right to be here like any other kid.”

A special education teacher told Yon she was too fearful of Cruz, that she needed to “get in his face” and tell him, “Hit me, go ahead and hit me.” She refused to do that.

When asked if in her 12 years as a teacher if she ever had another student who acted like Cruz, she had a simple response.

John Vesey, the then-Westglades principal, said in 35 years in education he also never had another student like Cruz.

“He was a much more needy kid than any kid I had ever seen,” Vesey said.

Before the end of eighth grade, Cruz was sent to a school, Cross Creek, that is for students with emotional and disciplinary problems. Cruz did relatively well there, which allowed him to eventually attend Stoneman Douglas. He was expelled from there a year before the shooting.

Vesey said success at Cross Creek is not necessarily predictive that a student like Cruz will succeed at a school like Stoneman Douglas with more than 3,000 students.

Cross Creek is “150 kids with support built in and you can make sure they are much more medication compliant,” Vesey said.

Vesey wishes he had warned Stoneman Douglas administrators about Cruz before he arrived.

“I feel very guilty about it,” he said. 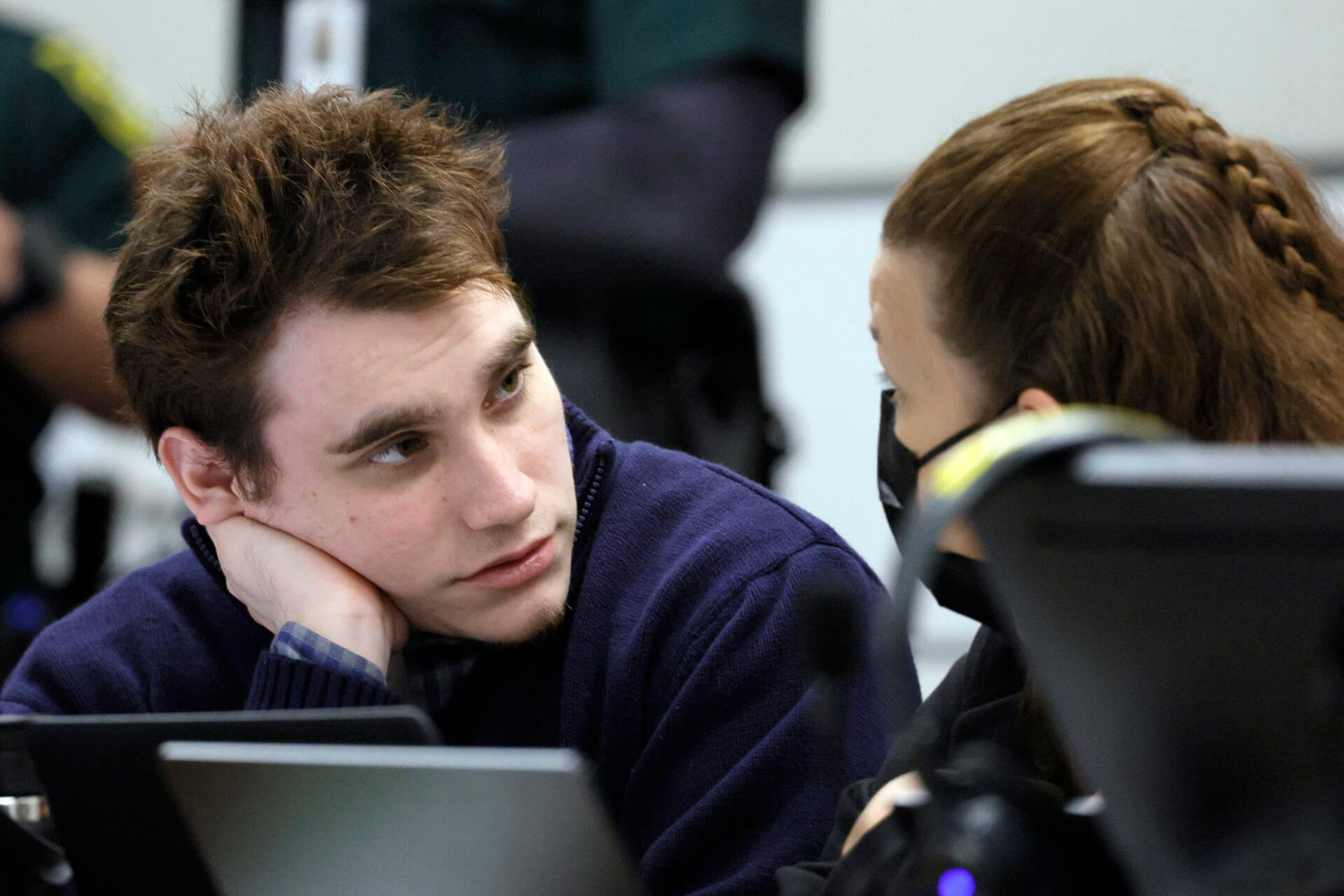