NEW YORK (AP) — A trial resulting from an American woman’s claims that Prince Andrew sexually abused her when she was 17 would probably occur late next year, a judge said Wednesday.

It is difficult to immediately set a trial date because of courthouse coronavirus protocols that limit how many trials can occur at once, but U.S. District Judge Lewis A. Kaplan said a trial date would likely fall between September and December 2022. 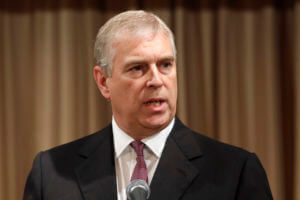 FILE – In this Sept. 30, 2013, file photo, Britain’s Prince Andrew, the Duke of York, speaks during the opening session of the Japan-UK security cooperation conference in Tokyo.  (AP Photo/Shizuo Kambayashi, File)

Last week, lawyers for Andrew asked Kaplan to throw out civil claims brought by Virginia Giuffre in an August lawsuit that the prince abused her on multiple occasions in 2001 during a period when she was abused by financier Jeffrey Epstein.

They said the prince “never sexually abused or assaulted” Giuffre, and they attacked the motives of Giuffre, saying she was seeking “another payday” at Andrew’s expense.

Wednesday’s conference, conducted electronically, lasted less than 10 minutes and featured only the judge and two lawyers, David Boies for Giuffre and Andrew Brettler for the prince.

Both attorneys said they expected to depose eight to 12 individuals, though Boies said the exact number depends “a little bit on who we can get and the timing of it.”

Boies said the individuals would include “the parties” — meaning Giuffre and Andrew — and a “number of potential witnesses.”

“We would be prepared to start some of the depositions relatively promptly, but some we may not identify for as much as two months,” the lawyer said.

Brettler said some of the people he may want to depose are related to a new lawsuit filed last week in which a woman who said she was sexually abused by Epstein asserted that Giuffre defamed her by saying in a series of October 2020 tweets that she was Epstein’s girlfriend and had recruited girls for him to abuse.

Brettler cited the lawsuit and said there “may be new witnesses in a new matter that may need to be deposed in this matter.” He did not elaborate on how the claims in that lawsuit would be used in arguments against Giuffre.

Epstein was found dead in his cell at a federal jail in Manhattan in August 2019 while he awaited trial on sex trafficking charges. The death was ruled a suicide.

Opening statements are scheduled for Nov. 29. Maxwell has pleaded not guilty.