DALLAS (AP) — The judge who gave a hug and Bible to a former Dallas police officer after she was sentenced to 10 years in prison for killing her neighbor said Monday that she watched the woman change during her trial and wants her to live a purposeful life. 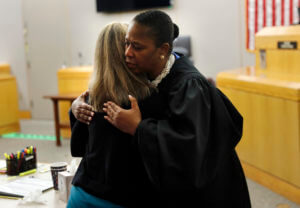 State District Judge Tammy Kemp gives former Dallas Police Officer Amber Guyger a hug before Guyger leaves for jail, Wednesday, Oct. 2, 2019, in Dallas. Guyger, who said she mistook neighbor Botham Jean’s apartment for her own and fatally shot him in his living room, was sentenced to a decade in prison. (Tom Fox/The Dallas Morning News via AP, Pool)

Judge Tammy Kemp said she had never previously acknowledged her Christian faith to a defendant or given one a Bible, but Amber Guyger said she didn’t have one at the end of her trial for the September 2018 killing of her upstairs neighbor, Botham Jean.

In her first interview since the jury convicted Guyger of murder last week, Kemp said she felt her actions were appropriate since the trial was over and the former officer told her she didn’t know how to begin seeking God’s forgiveness.

“She asked me if I thought that God could forgive her and I said, ‘Yes, God can forgive you and has,'” Kemp told The Associated Press.

“If she wanted to start with the Bible, I didn’t want her to go back to the jail and to sink into doubt and self-pity and become bitter,” she said. “Because she still has a lot of life ahead of her following her sentence and I would hope that she could live it purposefully.”

Critics contend that it was unethical of Kemp to hug Guyger and give her the Bible. One group asked for a judicial misconduct investigation, and some activists have said the hug took the focus off justified anger at a police killing.

Jean’s death drew widespread attention because of the strange circumstances and because it was one in a string of shootings of unarmed black men by white police officers.

Guyger, 31, had just worked a long shift and was still in her uniform when she entered Jean’s apartment and shot the 26-year-old accountant, who grew up in the Caribbean island nation of St. Lucia. She testified that she had mistaken his fourth-floor apartment for her own, which was directly underneath his, and that she thought he was an intruder.

After Guyger was sentenced and the jury left the courtroom, Jean’s brother, Brandt Jean, was allowed to address Guyger directly from the witness stand. He told her he forgave her and that Botham would have wanted her to devote her life to Christianity before the two shared a tearful embrace. Soon after that, Kemp walked over to the defense table to speak with Guyger, who she said went through a “marked change” after the verdict.

Kemp said that Guyger asked twice if she could hug her as well and, after a moment’s hesitation, the judge wrapped her arms around the former police officer.

“Following my own convictions, I could not refuse that woman a hug. I would not,” said Kemp, who is black. “And I don’t understand the anger. And I guess I could say if you profess religious beliefs and you are going to follow them, I would hope that they not be situational and limited to one race only.”

Kemp said she doesn’t know “the state of Ms. Guyger’s Christianity, if she’s even a Christian.” But she said she pointed Guyger to a Bible passage about God’s love “so that she could recognize that, even given the fact that she murdered someone, God still loves her.”

Last week, the Freedom From Religion Foundation, a secular Wisconsin-based group that routinely files lawsuits challenging religious displays in government, said Kemp was proselytizing from the bench and filed a complaint with a Texas agency that investigates allegations of judicial misconduct.

Kemp defended her actions as appropriate Monday, saying they took place after the legal proceeding was over and were not part of the official trial record.

“I didn’t do that from the bench,” she said. “I came down to extend my condolences to the Jean family and to encourage Ms. Guyger because [she] has a lot of life to live.” 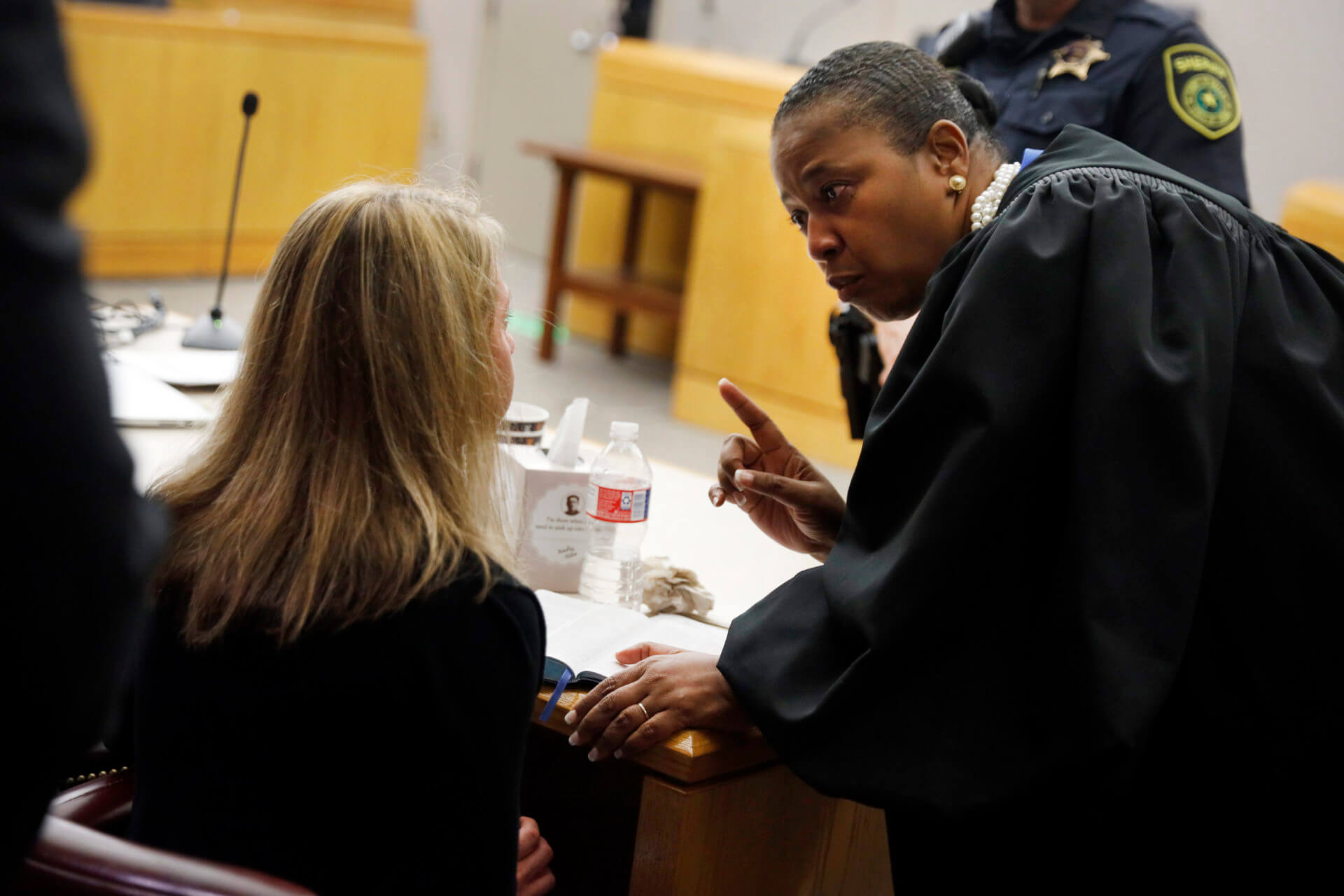 Former Dallas Police Officer Amber Guyger, left, listens to words of advice and encouragement from State District Judge Tammy Kemp after the judge had given her a Bible and before Guyger left for jail, Wednesday, Oct. 2, 2019, in Dallas. Guyger, who said she mistook neighbor Botham Jean's apartment for her own and fatally shot him in his living room, was sentenced to a decade in prison. (Tom Fox/The Dallas Morning News via AP, Pool)
MORE NEWS