WARREN COUNTY, Ohio — An Ohio judge has sealed Brooke Skylar Richardson’s conviction for abusing her newborn’s corpse, according to reports. 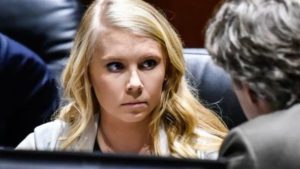 Richardson, then an 18-year-old high school senior, gave birth to the baby in secret and buried her in the backyard in May 2017. She was acquitted on charges of aggravated murder, involuntary manslaughter and child endangering after months of litigation and a trial that received national media coverage in September 2019.

She was sentenced to three years of community control and released by Warren County Common Pleas Judge Donald Oda II after only 14 months of her 36-month probation had been completed.

In November 2020, Richardson’s attorney said she has a job, is in college and continues with mental health treatment. Richardson is working for her attorneys’ law firm, Rittgers and Rittgers, and Richardson intends to study law.

WCPO, an E.W. Scripps Company, contributed to this report.