LEBANON, Ohio (WCPO) — Brooke Skylar Richardson, who was convicted by a Warren County jury of abusing her baby’s corpse, is requesting the judge seal the fifth-degree felony conviction.

Richardson, now 23, was found guilty in September 2019 of abuse of a corpse following the death of her baby girl that she buried in the backyard of her parents’ Carlisle home. After a lengthy trial, she was sentenced to three years of community control.

Oda, who presided over the trial, released Richardson after only 14 months of her 36-month probation had been completed.

In the short motion requesting the seal, Rittgers said “there are no criminal proceedings currently pending against Ms. Richardson, and the interests of the defendant in having the official record of this case sealed outweigh the legitimate needs, if any, of the state in maintaining such records.”

Warren County Prosecutor David Fornshell said, “we have received it and we will respond.”

Richardson, then an 18-year-old high school senior, gave birth to the baby in secret and buried her in the backyard. She was acquitted on charges of aggravated murder, involuntary manslaughter and child endangering after months of litigation and a trial that received national media coverage. 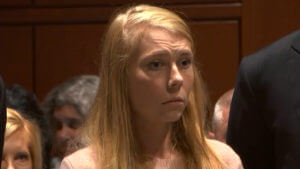 During the hearing to release Richardson from probation, Oda said there is a perception and a reality to this case, and the reality is Richardson was convicted of a low-level felony.

“There is no reason for me to invest the time and resources of my probation department in supervising you,” Oda said. The judge said probation is not punishment, but “it is an opportunity to demonstrate why the stated prison term of 12 months in prison should not be imposed.”

To Richardson, Oda concluded, “There is nothing … that leads me to believe you do not follow the rules or are going to commit any crimes in the future.”

In November 2020, Richardson’s attorney said she has a job, is in college and continues with mental health treatment. Richardson is working for her attorneys’ law firm, Rittgers and Rittgers, and Richardson intends to study law.

This story was originally published Aug. 17 by WCPO in Cincinnati, an E.W. Scripps Company.