NEW YORK (AP) — Ghislaine Maxwell’s trial will start in November on charges that she recruited teenage girls for financier Jeffrey Epstein to sexually abuse over a 10-year period, a judge said Tuesday.

Jury selection can occur in mid-November and opening statements will happen on Nov. 29, U.S. District Judge Alison J. Nathan wrote in an order.

The order was issued a day after prosecutors told the judge that both sides would be ready for trial in November, though defense lawyers preferred it begin on Nov. 8 while prosecutors wanted it to start on Nov. 29.

Nathan said jury selection can occur the week of Nov. 15. 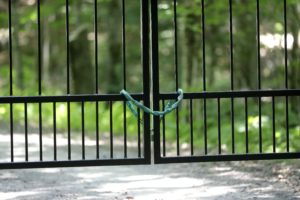 A locked gate spans a road going to an estate where Ghislaine Maxwell was taken into custoday, Thursday, July 2, 2020, in Bradford, N.H. The British socialite faces charges she helped recruit three girls — one as young as 14 — to have sex with financier Jeffrey Epstein, who was accused of sexually assaulting dozens of girls and women over many years. (AP Photo/Steven Senne)

The judge recently scrapped a July 12 trial date after defense lawyers complained that sex trafficking charges added in March left them insufficient time to investigate the new charges and prepare for trial.

Maxwell, 59, has been jailed at the Metropolitan Detention Center in Brooklyn since last July, when she was arrested at a New Hampshire estate. Nathan has denied bail three times, twice rejecting a $28.5 million proposed package that would have required Maxwell to remain in a New York City dwelling with 24-hour armed guards.

Nathan said she believed Maxwell was a risk to flee despite the U.S. citizen’s claims that she was willing to renounce her citizenship in England and France to prove her willingness to appear for trial.

Maxwell has pleaded not guilty to charges that she recruited teenage girls from 1994 to 2004 for Epstein to sexually abuse during encounters that sometimes were described as sexualized massages.

Prosecutors say their case hinges primarily on the testimony of four women who were abused, including two who say they were recruited when they were 14 years old.

Defense lawyers have challenged the charges on numerous grounds, though Nathan has rejected most of them. They have succeeded in severing perjury charges from those alleging sex abuse.

Epstein took his life in August 2019 in a federal Manhattan lockup as he awaited trial on sex trafficking charges.