GALLATIN, Tenn. (WTVF) — A judge will decide if a mother convicted of killing her newborn twins will get a new trial. Lindsey Lowe’s attorney requested a new trial, saying her client didn’t get a fair shake.

Judge Dee Gay has officially decided to take this case under advisement. That’s legal speak for formally ending the hearing process and taking a few days to review the case before making his decision. 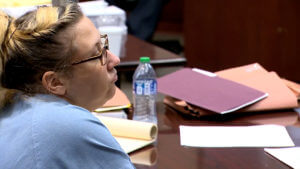 “When I reach a conclusion, I will issue an opinion and I will do that as soon as possible. That’s the only thing I can tell you,” said Judge Gay, during the proceedings Friday.

Lowe’s attorney, Kim Hodde, argued there was a biased member of the jury who filled out a questionnaire before the trial, admitting she had already formed an opinion and that she thought Lowe was guilty. Yet, she was still selected for the jury.

Evidently, Lowe’s attorney at the time, John Pellegrin, missed it. Lowe’s father also testified that he saw that same juror give a fist pump into the air when she was selected for the jury.

“It’s the right thing to do; it’s the fair thing to do, for everybody. And it’s apparent from this record that this juror never should have been a participant in this trial before this court,” said Hodde.

“Just because she said it, let’s say six weeks or five weeks before the trial, doesn’t mean she would have to have that bias in her mind,” said Whitley.

WTVF reporter Nick Beres spoke to the juror in question on the phone Thursday. She declined to comment on the proceedings.

At one point, the court even considered bringing the juror in to testify, but there are deep legal concerns about whether or not that’s feasible.

So, here’s what happens next: Judge Gay will release a written decision, either to keep Lowe in prison for her life sentence or to grant her a new trial.

This story was originally published Oct. 14 by WTVF in Nashville, an E.W. Scripps Company.