NEW YORK (AP) — Former President Donald Trump’s legal moves aimed at delaying a rape accuser’s defamation claims from reaching trial are in bad faith and, so far, succeeding, a judge said in a decision released Friday as he rejected an attempt by Trump to countersue.

E. Jean Carroll’s single claim of defamation “could have been tried and decided — one way or the other — long ago,” U.S. District Judge Lewis A. Kaplan said. 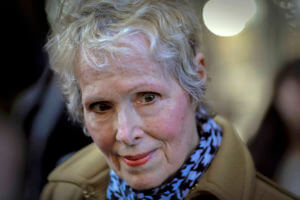 FILE – E. Jean Carroll listen as she meets with reporters outside a courthouse in New York, on March 4, 2020. Former President Donald Trump’s legal moves aimed at delaying a rape accuser Carroll’s defamation claims from reaching trial are in bad faith and, so far, succeeding, a judge said in a decision released Friday, March 11, 2022, as he rejected an attempt by Trump to countersue. (AP Photo/Seth Wenig, File)

A countersuit could have been filed 14 months ago, Kaplan wrote.

“The record convinces this Court that the defendant’s litigation tactics, whatever their intent, have delayed the case to an extent that readily could have been far less,” the judge wrote.

Trump’s attorney, Alina Habba, responded to a message seeking comment with an email saying, “While we are disappointed with the Court’s decision today, we eagerly look forward to litigating this action and proving at trial that the plaintiff’s claims have absolutely no basis in law or in fact.”

Roberta Kaplan, a lawyer for Carroll, said of the judge’s decision: “My client E. Jean Carroll and I could not agree more.”

Carroll, a longtime advice columnist for Elle magazine, wrote in a June 2019 book that Trump raped her in the mid-1990s in an upscale Manhattan department store. Trump denied it and questioned Carroll’s credibility and motivations.

Judge Kaplan wrote of litigation delays, saying Trump “attempted to evade” delivery of a copy of the lawsuit to his Manhattan residence or at the White House after it was originally filed in New York state court in November 2019. It was later moved to federal court.

Trump then used “frivolous” legal challenges to delay progress of the lawsuit, the judge wrote, including claiming that the state court lacked jurisdiction over him and that the lawsuit could not proceed until an appeal in another woman’s lawsuit alleging sexual misconduct by Trump was resolved.

The lawsuit can’t go to trial until the appeals court clarifies whether the defendant is Trump or the U.S. government.

In August 2020, Trump reportedly instructed then-U.S. Attorney General William Barr to cause the United States to intervene and substitute itself as the defendant, the judge said. That challenge, continued by President Joe Biden’s Justice Department, still awaits an appeals ruling.

“Taken together, these actions demonstrate that defendant’s litigation tactics have had a dilatory effect and, indeed, strongly suggest that he is acting out of a strong desire to delay any opportunity plaintiff may have to present her case against him,” the judge said.

The Associated Press does not typically identify people who allege sexual assault unless they come forward publicly, as Carroll has done.

The judge noted that Carroll is 78 years old and the only direct witness to the alleged rape besides Trump, saying “the relevance of these facts is obvious.”

“In the Court’s view, characterization of defendant’s previous and threatened future actions as dilatory, in bad faith or unduly prejudicial would be a bootless exercise. They are, in varying degrees, all three,” he said.