In an emotionless monotone, Broward County sheriff’s Detective Nick Masters read hundreds of searches and comments Cruz made starting seven months before the Feb. 14, 2018, massacre as prosecutors try to prove he planned it.

They included searches about the mass shootings at Columbine High School in 1999, a movie theater in the Denver suburbs in 2012, Virginia Tech University in 2007, a South Carolina Black church in 2015 and a Las Vegas country music concert in 2017.

In comments, Cruz praised Elliot Rodger, who killed six people in 2014 before taking his own life and has become a touchstone among disturbed young men who identify as “involuntary celibates” or “incels” because women won’t date them. 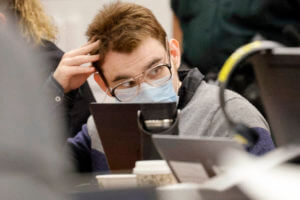 Nikolas Cruz is being tried in the penalty phase of his trial at the Broward County Courthouse in Fort Lauderdale on Wednesday, July 27, 2022. Cruz previously plead guilty to all 17 counts of premeditated murder and 17 counts of attempted murder in the 2018 shootings. (Mike Stocker/South Florida Sun Sentinel via AP, Pool)

In posts on YouTube, Cruz wrote “I wanna kill people,” “I’m going to be a professional school shooter,” “I have no problem shooting a girl in the chest” and “No mercy.” He wrote “It makes me happy to see people die” followed by a smiley face emoji and “I love to see the familys suffer.”

About two months before his attack, Cruz turned his focus toward Stoneman Douglas, the school he periodically attended before he was expelled in early 2017. He researched the school’s operating hours and pulled up a campus map.

Finally, less than 24 hours before the massacre, he searched for, “How long does it take a cop to show up at a school shooting?” He fled the school after seven minutes.

Some of the seven men and five women on the jury and their 10 alternates scribbled madly as Cruz’s words were posted on video screens in front of them. Victims’ parents and family members in the gallery audibly gasped as they saw the posts, with some shaking their heads.

Under questioning by Cruz’s attorney, Masters said all the posts were in public forums and many under his own name. He said that, to his knowledge, Google and YouTube had no method for locating and reporting such posts and searches. 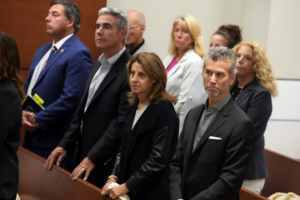 Max and Caryn Schachter, right, with Tom Hoyer, third from right, stand with family members of victims of the Marjory Stoneman Douglas High School shootings during the penalty phase of the trial of confessed killer Nikolas Cruz at the Broward County Courthouse in Fort Lauderdale on Wednesday, July 27, 2022. The Schachter’s son, Alex, and Hoyer’s son, Luke, were killed in the 2018 shootings. Cruz previously plead guilty to all 17 counts of premeditated murder and 17 counts of attempted murder in the 2018 shootings. (Mike Stocker/South Florida Sun Sentinel via AP, Pool)

Cruz, 23, pleaded guilty to 17 counts of first-degree murder in October, meaning the jury will decide only whether he is sentenced to death or life without parole. The shooting left 14 students, a teacher, the athletic director and an assistant football coach dead.

Earlier Wednesday, a jail guard testified that Cruz attacked him with little warning nine months after the massacre and tried to wrest away his electric stun gun.

Jurors saw a surveillance video of the Nov. 13, 2018, brawl with Broward County sheriff’s Sgt. Raymond Beltran, who was supervising Cruz’s recreation period in the isolated area where he is kept.

The guard testified that after he told Cruz to walk properly on his slippers, Cruz flashed both middle fingers and then charged him, flipping the guard onto the ground. Beltran was able to flip Cruz over and they wrestled over Beltran’s Taser, which Cruz was able to pull from its holster.

He said he feared Cruz would use it against him and then “he could do whatever he wants to me.”

The Taser discharged, but the probes missed both of them. Beltran regained control of the Taser and used it to punch Cruz, staggering him. Cruz then got on the ground, was handcuffed and put back into his cell. Beltran suffered no serious injuries.

With the trial now in its second week, the jury has seen terrifying video of the attack, and heard from traumatized survivors and police officers who rushed into the nightmarish scene inside a three-story classroom building. They have examined gruesome autopsy and crime scene photos.

They also saw video depicting Cruz’s nonchalance as he walked to a sandwich shop to buy a drink and then visited a McDonald’s just minutes after he fled the school. On Monday, they saw the AR-15-style semi-automatic rifle Cruz fired more than 150 times.

This is the deadliest mass shooting in U.S. history to reach trial. Nine U.S. gunmen besides Cruz who killed at least 17 people died during or immediately after their shootings, either by suicide or police gunfire. The suspect in a 10th, the 2019 slaying of 23 people at a Walmart in El Paso, Texas, is awaiting trial.

Prosecutors said Wednesday that they plan to end their case next week after the jury visits the building where the massacre occurred. It has been sealed off since shortly after the shooting and its walls and floors remain blood-stained and bullet-pocked, with rotted Valentine’s Day flowers and deflated balloons strewn about.

After a one-week break, the trial will resume with a defense case that will focus on Cruz’s life, including his birth mother’s drinking during pregnancy, his long history of emotional and mental problems, his alleged sexual abuse and the deaths of his adopted parents. The prosecution will then present a rebuttal case.

When jurors get the case, probably in October or November, they will vote 17 times, once for each of the victims, on whether to recommend capital punishment. 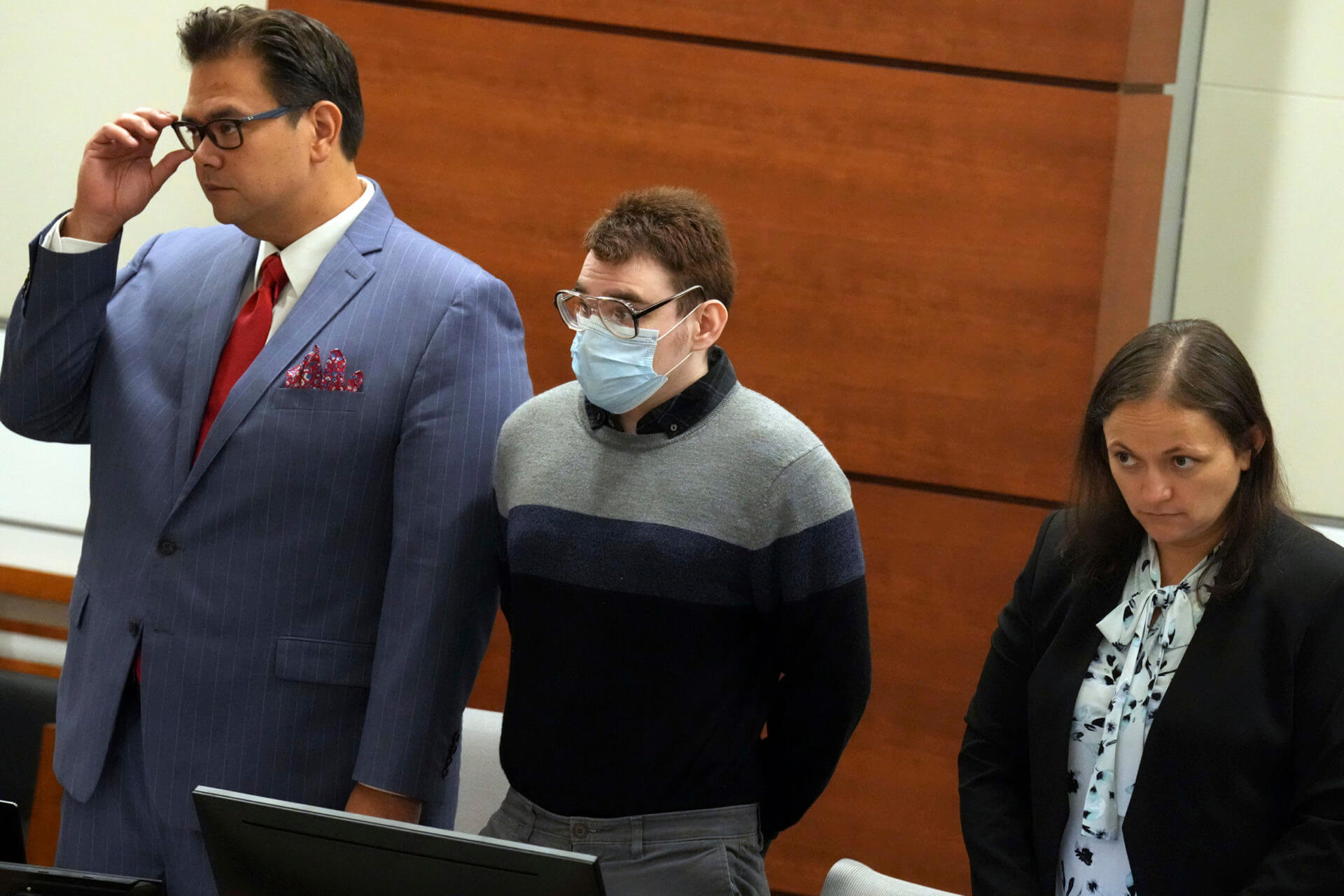