DENVER (KOAA) — Two juveniles arrested in connection with a deadly apartment fire in Lakewood, Colorado that happened on Oct. 31 were charged with 100 counts each, including first-degree murder and first-degree arson. 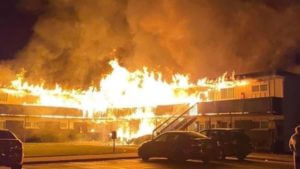 The two boys, who are ages 12 and 14, were charged as juveniles. The 100 counts include one sentence enhancer for each victim who lived at the Tiffany Square Apartments.

The fire killed 31-year-old Kathleen Payton and her daughter, 10-year-old Jazmine Payton-Aguayo, and displaced residents in all 32 units of the complex. Ten people were injured. Prosecutors have alleged the boys may have used Molotov cocktails to start the fire.

The boys face the following charges: 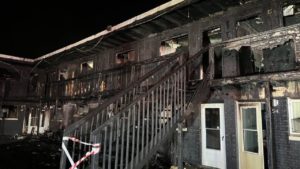 The 1st Judicial District Attorney’s Office said no determination had been made about potentially transferring their cases into adult court. The two are next due in court on Nov. 14 to be arraigned. They were ordered to be held without bond at a court hearing earlier this week.

The boys were arrested on Sunday, several days after police first identified them as suspects and obtained warrants for their arrests.

The first calls to 911 regarding the fire came in around 4:15 a.m. on Oct. 31. Several apartments were already fully on fire by the time firefighters arrived, according to West Metro Fire Rescue spokesperson Ronda Scholting. Some of the victims had to jump out of their windows to escape, Lakewood police said.

In all, 14 units were damaged by the fire and the others were affected by smoke and water.

This story was originally published Nov. 11, 2022 by KOAA in Colorado Springs, an E.W. Scripps Company.