NEW YORK (AP) — Actor Kevin Spacey asked a judge Friday to throw out actor Anthony Rapp’s sex abuse lawsuit, saying through his lawyers that allegations that he abused the then-teenage Rapp at a 1980s party are false.

The lawyers wrote in papers filed in Manhattan federal court that the alleged events Rapp described never occurred. Rapp has appeared in “Rent” on Broadway and in “Star Trek: Discovery” on television. 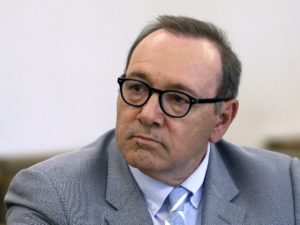 FILE – In this June 3, 2019, file photo, actor Kevin Spacey attends a pretrial hearing at district court in Nantucket, Mass. Spacey asked a judge Friday, April 8, 2022, to throw out actor Anthony Rapp’s sex abuse lawsuit, saying through his lawyers that allegations that he abused the then-teenage Rapp at a 1980s party are false. (AP Photo/Steven Senne, File)

He alleged in his lawsuit that he went to a party in 1986 at Spacey’s Manhattan home, where a 26-year-old Spacey, without Rapp’s consent, “engaged in a sexual advance” by grabbing Rapp’s buttocks and lifting him onto a bed and laying on his body. Rapp claimed he “was forced to extricate himself” before leaving the party.

Spacey’s lawyers argued the alleged encounter cannot qualify as sexual abuse under New York’s laws because the only alleged contact with an “intimate” part of the body by Spacey was when his hand grazed the 14-year-old Rapp’s buttocks when the older actor picked him up. The lawyers said Rapp “wriggled out” with no resistance during an encounter of less than 30 seconds.

There was no other evidence that would suggest any fleeting contact between Spacey’s hand and Rapp’s buttocks was for the purpose of sexual gratification or to degrade or abuse Rapp, the lawyers wrote.

The lack of evidence means Rapp’s claims for assault, battery and intentional infliction of emotional distress must fail, the lawyers said.
They said Spacey “flatly denies” that any of what Rapp described took place.

Lawyers for Rapp did not immediately respond to a request for comment.

When Rapp first spoke publicly of his claim in 2017, others went public too and Spacey’s then-celebrated career abruptly halted. At the time, Spacey issued a statement saying he didn’t remember the encounter but apologized.

Spacey won an Academy Award for Best Actor for his role in “American Beauty,” a 1999 film in which he played a frustrated suburban father who lusts after his daughter’s best friend.

In recent filings, Rapp’s lawyers have asked to transfer the case to state court, saying Spacey cannot prove he has been living in Maryland and qualifies for the diversity of citizenship necessary to remain in federal court.

In fact, they argue, he has been mostly living in London since 2003.

They said he only lived in Maryland when he was acting in his Emmy-winning role in “House of Cards” from 2014 through 2017. He was fired from the show days after Rapp went public and former show workers claimed that Spacey made the production a “toxic” workplace and one ex-employee alleged the actor sexually assaulted him.

In November, an arbitrator said Spacey and his production companies must pay the studio behind the Netflix political thriller $31 million because of losses they incurred after his firing.

Spacey appealed the decision to a panel of three more private arbitrators, who found for the plaintiffs, making the decision final, and public.

A criminal case brought against him, an indecent assault and battery charge stemming from the alleged groping of an 18-year-old man at a Nantucket resort, was dismissed by Massachusetts prosecutors in 2019.