LOUISVILLE, Ky. (AP) — Two neighbors of Breonna Taylor who testified against the officer who shot into their apartment are asking a judge to move their civil lawsuit out of Louisville because “fatigue” has biased the public in favor of police, flipping the argument made by the former officer ahead of his criminal trial. 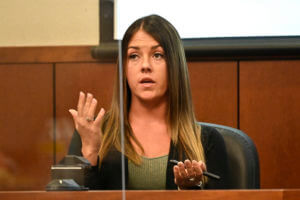 FILE – Chelsey Napper, the next door neighbor of Breonna Taylor, testifies during the trial of former Louisville police officer Brett Hankison, on March 1, 2022, in Louisville, Ky. Neighbors Napper and Cody Etherton are asking a judge to move their lawsuit out of Louisville because “fatigue” over the Taylor case could sway a jury in favor of the police. (AP Photo/Timothy D. Easley, Pool, File)

The argument for a location change is notable because the former officer, Brett Hankison, had also pushed for a new venue ahead of his February trial, over fear that a jury pool in Louisville would be biased against police. In their motion, Taylor neighbors Cody Etherton and Chelsey Napper argue it’s the opposite — potential jurors in Louisville may have grown tired of the Taylor case.

Etherton and Napper, who lived together with Napper’s young son, testified at trial against Hankison, who fired through Taylor’s apartment and into theirs. Taylor, a 26-year-old Black woman, was shot to death during the raid by officers who used a search warrant to knock down her door on March 13, 2020. Hankison was the only officer charged in the incident.

Etherton and Napper “have no recourse but to express to this court their concern about the very real possibility of community bias against their case because of Breonna Taylor fatigue within the Louisville community and the victimization of LMPD and its officers by some national and local media outlets and politicians,” according to the motion filed in March in U.S. District Court in Louisville.

The couple’s Louisville attorney, Jeffrey Sexton, argues that the exoneration of Hankison by a jury in March “laid bare the potential existence of bias” against Napper and Etherton’s case. Hankison was fired after the Taylor incident for shooting blindly into Taylor’s apartment. 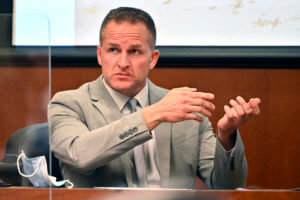 FILE – Former Louisville Police officer Brett Hankison talks about seeing a subject in a firing stance in the apartment as he is cross-examined in Louisville, Ky. on March 2, 2022. Breonna Taylor’s neighbors Chelsey Napper and Cody Etherton are asking a judge to move their lawsuit out of Louisville because “fatigue” over the Taylor case could sway a jury in favor of the police. (AP Photo/Timothy D. Easley, Pool, File)

It says the trial’s evidence — including testimony from Etherton and Napper — was “overwhelmingly against Hankison insofar as the Kentucky criminal law defining wanton endangerment is written.” The jury found him not guilty after deliberating for about three hours.

The suit names Hankison and former officers John Mattingly and Myles Cosgrove, along with other officers and the city of Louisville. A response to the motion filed by lawyers for those defendants opposed moving the case out of Louisville, arguing that it’s too early to tell if there’s any bias and that Sexton’s claims are not based on any evidence. They also said moving the case would be a major inconvenience to witnesses who live in Louisville.

A judge has not ruled on the change of venue motion. Sexton said he is working on amending the lawsuit with under oath testimony from the Hankison trial. He said he has to file the updated suit by the end of this month.

After police knocked down Taylor’s door and Taylor’s boyfriend fired a shot at officers, Hankison fired shots that went through Taylor’s apartment and into her neighbor’s unit. Etherton said one bullet narrowly missed him in a hallway.