COLUMBIA, S.C. (AP) — A South Carolina lawyer charged with trying to arrange his own death steered the family of a housekeeper who died in his home to use a longtime friend as their attorney without revealing their friendship and then tried to take a $4 million settlement, according to the family’s lawyer.

Alex Murdaugh also tried to convince a friend of his son to use the same lawyer again without revealing their friendship as investigators tried to sort out who was driving a boat in a 2019 fatal crash, according to a lawsuit filed this week. Murdaugh’s son would eventually be charged. 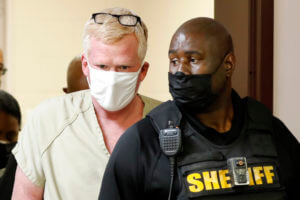 Alex Murdaugh walks into his bond hearing Thursday, Sept. 16, 2021, in Varnville, S.C. Murdaugh surrendered to face insurance fraud and other charges after state police said he arranged to have himself shot in the head so that his son would get a $10 million life insurance payout. (AP Photo/Mic Smith)

That son, Paul Murdaugh, was killed along with his mother, Maggie, in an unsolved shooting at the family’s home in June. Since the deaths, state police have started a half-dozen investigations into the Murdaugh family.

Alex Murdaugh remains in out-of-state drug rehab, which he entered shortly before being charged with insurance fraud and filing a false police report, accused of trying to arrange his own death Sept. 4 so his surviving son could collect his $10 million life insurance policy. Authorities said the shot from a hitman only grazed Murdaugh, leaving him able to call 911.

The FBI and federal prosecutors are helping state agents in all of the investigations as needed, State Law Enforcement Division Chief Mark Keel said in a statement Thursday.

“We will continue to call upon our federal partners as their assistance is needed to successfully investigate and prosecute specific aspects of these cases,: Keel said.

This week’s revelations surrounding Murdaugh involved two lawsuits that said he tried to manipulate the legal system — one to prevent his housekeeper’s sons from collecting on Murdaugh’s insurance and a second to try to prevent criminal trouble for his son in the boat crash.

The Murdaugh’s housekeeper and nanny, Gloria Satterfield, died in February 2018 after tripping over the family dog, a lawyer for the sons told media outlets.

Murdaugh spoke to the sons at their mother’s funeral and convinced them to hire Corey Fleming as their lawyer for a wrongful death settlement with his insurance company. But he did not tell them Fleming was a longtime friend, old college roommate and godfather to at least one of Murdaugh’s sons.

Murdaugh and Fleming arranged a $505,000 settlement in public records almost a year ago, which the sons have not seen a dime of, attorney Eric Bland said.

But since filing the suit, Bland said he learned of a second $4.3 million settlement with a different insurer that was never revealed to Satterfield’s son or placed into the public court docket.

Bland said he is turning the information over to the State Law Enforcement Division, which is investigating Satterfield’s death after a coroner said the accidental death was never reported to her office.

Fleming did not respond to an email or phone message. Murdaugh’s lawyers have not commented about Satterfield’s death or other lawsuits.

Fleming is also prominent in a lawsuit by Connor Cook, who was in a boat that crashed in 2019, killing a 19-year-old woman.

The night of the crash, investigators were not sure if Cook or Paul Murdaugh was driving the boat. Alex Murdaugh approached Cook in the hallway of a hospital as he headed to get his jaw X-rayed and told him everything would be alright if he would “keep his mouth shut,” according to Cook’s lawsuit.

Alex Murdaugh then encouraged Cook to hire Fleming as his attorney without revealing their relationship, the lawsuit said.

Fleming became Cook’s lawyer and told him not to talk to investigators and that set him up to be falsely identified as the driver of the boat, the suit said.

It was not until Cook hired a new lawyer and spoke to prosecutors that Paul Murdaugh was charged with boating under the influence causing death, a charged pending when he was killed.

The State Law Enforcement Division is investigating whether Alex Murdaugh or other friends or family members tried to obstruct the investigation into the boat crash as well as the questions surrounding Satterfield’s death. They also are seeing if the family was involved in a 2015 hit-and-run, unraveling the shooting of Murdaugh this month on a lonely highway and looking into millions of dollars missing from the law firm that fired Murdaugh earlier this month.

All those investigations started after the June 7 deaths of Paul Murdaugh, 22, and his mother, Maggie, 52. Investigators have released few details about the killings beyond both were shot several tines outside their Colleton County home, likely dying about an hour before Alex Murdaugh said he came home and discovered their bodies.

This story was originally published September 23, 2021.