ATLANTA (AP) — Rudy Giuliani will not appear as scheduled Tuesday before a special grand jury in Atlanta that’s investigating whether former President Donald Trump and others illegally tried to interfere in the 2020 general election in Georgia, his lawyer said. 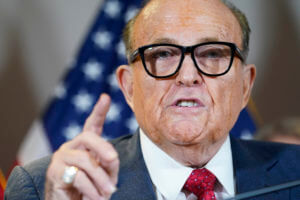 FILE – Former New York Mayor Rudy Giuliani, a lawyer for President Donald Trump, speaks during a news conference at the Republican National Committee headquarters, Nov. 19, 2020, in Washington. A lawyer for Giuliani says he will not appear as scheduled Tuesday, Aug. 9, 2022, before a special grand jury in Atlanta that’s investigating whether former President Donald Trump and others illegally tried to interfere in the 2020 general election in Georgia. (AP Photo/Jacquelyn Martin, File)

“Judge Robert McBurney excused him pending a hearing tomorrow on the motion to continue,” Costello wrote in a text message.

Nothing in publicly available court documents indicates that Giuliani is excused from appearing, but McBurney has scheduled a hearing for 12:30 p.m. Tuesday to hear arguments on a court filing from Giuliani seeking to delay his appearance. In a court filing Monday, Fulton County District Attorney Fani Willis asked the judge to deny Giuliani’s request for a delay and to instruct him to appear before the special grand jury as ordered.

Willis opened an investigation early last year, and a special grand jury with subpoena power was seated in May at her request.

Last month she filed petitions seeking to compel testimony from seven Trump advisers and associates, including Giuliani. Because they don’t live in Georgia, she had to use a process that involves getting a judge in the state where they live to order them to appear.

New York Supreme Court Justice Thomas Farber on July 13 issued an order directing Giuliani to appear before the special grand jury on Aug. 9 and on any other dates ordered by the court in Atlanta.

In a court filing, Giuliani attorney William Thomas asked the judge to delay Giuliani’s appearance. He explained that Giuliani inadvertently missed a hearing before Farber because he was recovering from a medical procedure and subsequently learned he’d been ordered to appear in Atlanta.

On Aug. 2, a lawyer for Giuliani asked Willis’ office to delay his appearance because he was unable to travel because of the recent medical procedure, according to court filings. That request was rejected after Willis’ team found evidence that he had traveled since his medical procedure.

Thomas wrote that a Giuliani attorney then clarified to Willis’s team that he is not cleared for air travel, but Willis still refused to postpone his appearance.

In her Monday court filing, Willis wrote that her team had obtained records indicating that between July 19 and July 21, Giuliani bought multiple airline tickets, including tickets to Rome, Italy, and Zurich, Switzerland, for travel dates between July 22 and July 29, the filing says. If Giuliani is not cleared for air travel, she wrote, her team offered to provide alternative modes of transportation, including bus or train fare.

Thomas wrote that Giuliani had also offered to appear virtually, for example by Zoom.

“It is important to note here that Mr. Giuliani is no way seeking to inappropriately delay, or obstruct these proceedings or avoid giving evidence or testimony that is not subject to some claim of privilege in this matter,” Thomas wrote, noting that Giuliani had appeared virtually before the committee investigating the Jan. 6, 2021, attack on the U.S. Capitol and testified for more than nine hours.

“Mr. Giuliani is willing to do the same here under conditions that replicate a grand jury proceeding,” Thomas wrote.

In the petition for Giuliani’s testimony, Willis identified him as both a personal attorney for Trump and a lead attorney for his campaign.

She wrote that he and others presented a Georgia state Senate subcommittee with a video recording of election workers that Giuliani alleged showed them producing “suitcases” of unlawful ballots from unknown sources, outside the view of election poll watchers.

Within 24 hours of that hearing on Dec. 3, 2020, Secretary of State Brad Raffensperger’s office had debunked the video and said that it had found that no voter fraud had taken place at the site. Nevertheless, Giuliani continued to make statements to the public and in subsequent legislative hearings claiming widespread voter fraud using that debunked video, Willis wrote.

Evidence shows that Giuliani’s appearance and testimony at the hearing “was part of a multi-state, coordinated plan by the Trump Campaign to influence the results of the November 2020 election in Georgia and elsewhere,” the petition says.