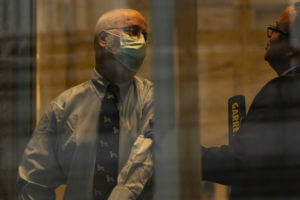 The institutions have already agreed to pay more than $236 million to settle civil claims by more than 200 former patients.

The federal case against Hadden is focused on only a few of those women. Prosecutors say Hadden invited his victims to meet with him alone in his office, where he used the trust and rapport he developed with patients to engage in increasingly abusive conduct under the guise that it was legitimate medical care.

That included inappropriate and unnecessary breast and pelvic exams.

In her opening statement to the jury, defense lawyer Deirdre Von Dornum acknowledged that Hadden had hurt women. The former doctor, now 64, pleaded guilty to state charges seven years ago, admitting that he had sexually abused patients.

But Von Dornum asked the jury to acquit Hadden of the federal charges accusing him of enticing women to cross state lines to be abused, saying the doctor didn’t know patients had traveled from places including New Jersey and Nevada to see him.

“The allegations are awful and shocking,” she said, warning jurors that she was not encouraging them to feel sorry for Hadden, but asking them to listen carefully to the women who will testify about being abused and hear what they say.

She said the “question is not whether inappropriate activity or sexual abuse happened,” but whether Hadden knew in advance which patient he was scheduled to see on which days.

“Cancel, condemn him,” the lawyer urged, before adding: “Do not convict him for a crime he did not commit.”

Assistant U.S. Attorney Paul Monteleoni urged jurors to convict the doctor, who he said had assaulted “patient after patient, year after year.”

Several of Hadden’s victims will testify during the trial, along with nurses who said they witnessed Hadden touching patients inappropriately.

For Hadden’s accusers, the federal case represents a second chance for a harsher punishment for the doctor. In his 2016 plea deal with the Manhattan District Attorney’s Office, Hadden surrendered his medical license but wasn’t required to serve any jail time.

The ensuing outrage, during the height of the #MeToo movement, led other women to come forward, including Evelyn Yang, the wife of Democrat Andrew Yang, who ran for president in 2020 and for New York City mayor in 2022.

In 2020, she said Hadden sexually assaulted her eight years prior, even when she was seven months pregnant. Yang had called the sentence in the state case a “slap on the wrist.” 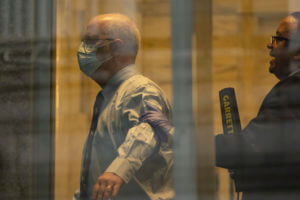 The district attorney at the time, Cyrus Vance Jr., defended his decision. Because a conviction wasn’t assured, he argued, his office sought a plea deal to prevent Hadden from practicing medicine and from victimizing additional women.

Yang is not one of the women at the center of the federal case and is not scheduled to testify. Her public discussion of the case, though, helped raise its profile. Last year, New York’s Legislature passed a law temporarily setting aside time limits for victims of sexual abuse to sue their alleged predators.

The Associated Press generally withholds the names of sexual abuse victims from stories unless they have decided to tell their stories publicly, which Yang and others have done.

Hadden, who lives in Englewood, New Jersey, has been free on $1 million bail since 2020 while awaiting trial.

The prosecutor, Monteleoni, said the victims had undergone “experiences, in some cases, they couldn’t talk about for years; experiences that scarred them.”

He added: “These victims would give anything for this not to have happened.”