NEW YORK (AP) — A gynecologist who molested patients during a decadeslong career was convicted of federal sex trafficking charges Tuesday after nine former patients told a New York jury how the doctor they once trusted attacked them sexually when they were most vulnerable. 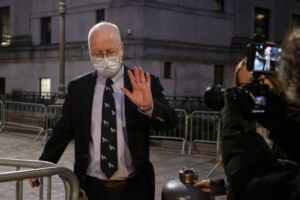 A Manhattan federal court jury returned its verdict after deliberating less than a day in the case against Robert Hadden, 64, who worked at two prestigious Manhattan hospitals — Columbia University Irving Medical Center and New York-Presbyterian Hospital — until complaints about his attacks shut down his career.

Hadden’s lawyers admitted that their client had sexually abused patients, but they said his guilty plea to charges in state court seven years ago put those crimes behind him.

Prosecutors said federal charges were appropriate because Hadden enticed women to cross state lines so he could attack them.

Defense lawyers argued that he didn’t know patients were coming from other states.