NEW YORK (AP) — A potential plea deal that would have averted a criminal trial for an associate of Rudy Giuliani never materialized despite talks, lawyers said Tuesday.

A prosecutor told U.S. District Judge J. Paul Oetken at a final pretrial hearing to discuss trial ground rules that the talks with lawyers for Lev Parnas never reached the stage where a formal plea offer was put in writing. 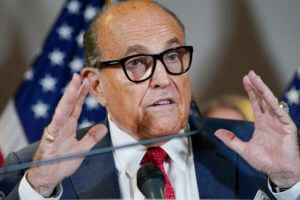 Jury selection at a trial for Parnas, a Soviet-born Florida businessman, and Ukraine-born investor Andrey Kukushkin, is scheduled to begin Tuesday.

The men are charged with making illegal campaign contributions to U.S. politicians.

Parnas and Igor Fruman, another Soviet-born Florida businessman, worked with Giuliani to try to convince Ukraine to open an investigation into President Joe Biden’s son, Hunter, over his connection to a Ukrainian energy company.

Giuliani has said he had no knowledge of illegal campaign contributions but acknowledged working extensively with Fruman and Parnas as he sought damaging information on Biden. Fruman, recently pleaded guilty to soliciting $1 million in contributions from a foreign national.

Parnas was in court Tuesday while Kukushkin appeared remotely from San Francisco. Both pleaded not guilty to the latest version of the indictment, which was little changed from the previous one.

“While those conversations were ongoing for a period, they’ve ended,” Roos said.

He described the discussions as tentative and said there were talks at one point about a plea that would not involve every count in the indictment, but prosecutors decided that any plea close to trial would be to all counts.

Attorney Joseph Bondy, representing Parnas, said his defense team was open “to attempting to resolve this matter” and even engaged in a 10-hour “proffer” session in which Parnas discussed evidence with prosecutors.

But he said the door that was open a few months ago “where we might have been able to reap the benefits of a plea” was shut when prosecutors more recently insisted “we should eat every count of the indictment.”

“Do you now choose to go to trial on the remaining charges?” the judge asked Parnas.

Attorney Gerald Lefcourt, representing Kukushkin, said he had sought a deferred prosecution agreement from prosecutors that would have likely spared his client from a conviction and possible prison time.

“That was not acceptable to the government. And there’s been nothing else,” Lefcourt said.

Lefcourt and Bondy also urged the judge to question every potential juror to ensure they did not have reactions to ex-President Donald Trump and Giuliani, among others, that would affect their impartiality. Giuliani worked for Trump as a personal attorney when some alleged crimes occurred.

Prosecutors said mention of Trump and Giuliani will primarily arise at trial when the government tries to show jurors that Parnus and Fruman touted their connections with the men by sending photographs of themselves with Trump and Giuliani to others.

The judge rejected a request by Bondy to tell jurors that Parnas was brought to the United States when he was 4.

Bondy said he wanted to counter the mistaken impression, enhanced by a skit on “Saturday Night Live,” that portrayed his client as a man with a foreign accent.

“I think of him as a guy from Brooklyn,” Bondy said.