JEFFERSON COUNTY, Colo. (KMGH) — A husband and wife were rescued from a kidnapping suspect Friday morning while they were hiking near Bear Creek Lake Park, according to the Jefferson County Sheriff’s Office. 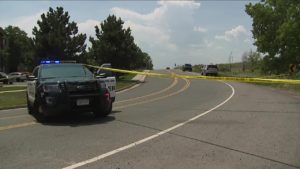 Two people were rescued from a kidnapping suspect Friday morning while they were hiking near Bear Creek Lake Park, according to the Jefferson County Sheriff’s Office. (KMGH)

The sheriff’s office said its deputies are investigating a felony menacing and kidnapping of the two hikers along the 3600 block of S. Oak St. in Lakewood, which is along the east side of The Homestead Golf Course, next to Bear Creek Lake Park.

Jacki Kelley, public information officer with the sheriff’s office, said the couple were walking on a trail and passed the suspect, who was leaned over and tying his shoe. As they passed him, he stood up and held them at gunpoint, she said. There was some sort of verbal exchange before the suspect ordered the woman on the ground, put a nylon leash around her neck, and started to lead the couple away from the trailhead.

Around 8:10 a.m., a witness passed the two hikers and the suspect and saw the couple was being held at gunpoint. That witness called 911 immediately.

“We’re very grateful for that original call because it had us going very quickly to this area,” Kelley said.

The witness stayed on the phone with dispatch and described what he saw happening. At some point before authorities arrived, the husband was able to get the gun away from the suspect, who was later identified by the sheriff’s office as Kerry Endsley, 73.

When deputies arrived, they found the couple and started searching for the suspect. 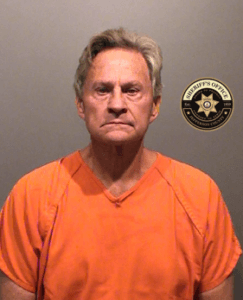 Once they found him a few minutes later, he pulled a weapon — which deputies later learned was a stun gun — and pointed it at the deputies. A deputy fired a shot him, but missed, Kelley said. Another deputy used a Taser on the suspect, who was then taken into custody.

Kelley said Endsley was complaining of injuries that were likely related to the Taser.

Endsley was arrested on charges of second-degree kidnapping, felony menacing and violation of a restraining order.

The husband and wife, plus the witness who called 911, are being interviewed, Kelley said. They are still investigating Endsley’s motives or agenda was as he led the couple off-trail.

“This is alarming, there is no question about it,” she said. “We have two victims who are shaken up and a witness who is pretty upset about what he witnessed this morning.”

This story was originally published June 17 by KMGH in Denver, an E.W. Scripps Company.