TULSA — An Oklahoma man is behind bars after he tried to violently kidnap his former female co-worker and shot the woman’s husband, according to Tulsa Police. 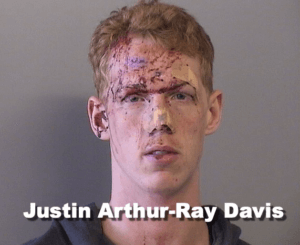 Justin Arthur-Ray Davis allegedly stalked the woman for over a month after quitting their mutual workplace, leaving candy and food outside her apartment door.

As the woman was leaving for work on the morning of April 2, she and her husband spotted Davis sitting nearby in his truck. Police say Davis “exited the truck with a shot gun and ran after them.” The couple retreated into their apartment where Davis “shot through the door, hitting the husband in the hand.” He then grabbed the victim and drug her to his truck while beating her. Neighbors called 9-1-1 as Davis allegedly choked and punched the woman.

When her husband ran after them, Davis reportedly threatened to kill the man if she didn’t go with him, firing two shots into the air. As officers pulled up to the scene, Davis fled and led them on a pursuit. He ultimately wrecked his vehicle and was taken into custody.