CONCORD, N.H. (AP) — A jury on Thursday convicted a New Hampshire man of first-degree murder for killing his wife’s coworker after he discovered they were texting, and then forcing her to behead him. 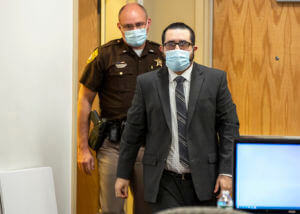 Armando Barron enters a courtroom at the Cheshire County Superior Court, Thursday, May 26, 2022, in Keene, N.H. A jury on Thursday convicted Barron of first-degree murder for killing his wife’s coworker after he discovered they were texting, and then forcing her to behead him. (Hannah Schroeder/The Sentinel via AP, Pool)

Armando Barron, 32, faces a life sentence without parole. He also was convicted of assaulting his wife, Britany Barron, the night he discovered she had been texting with her coworker, 25-year-old Jonathan Amerault. Prosecutors said he used her cellphone to lure him to a park just north of the Massachusetts state line in September 2020. Barron also was convicted of beating and kicking Amerault, forcing him into his own car and shooting him.

Amerault’s mother was in the courtroom and started crying as the verdict was read. The jury had the case for a little under two hours.

“The defendant had all the motive to kill Jonathan, because for him, Jonathan was a man who had just started seeing his wife,” prosecutor Benjamin Agati said during closing arguments. “A man who his wife thought looked like an Abercrombie model, a man who was at her workplace that he now knew was talking to his wife behind his back. The man that he instantly saw as a rival.”

In closing arguments, Barron’s lawyer said Britany’s testimony was contradicted by physical evidence and she had a motive to lie, while a prosecutor said she told the truth and had feared for her life.

Barron had pleaded not guilty to the charges. His lawyers argue that his wife shot Amerault, which she denies.

His lawyer, Meredith Lugo, said the “primary example” of Britany’s testimony not being supported by the evidence was her description of how Armando shot that last bullet in the hatchback vehicle. She said he was turned around in the passenger’s seat, with Amerault in the back and his head up against the door of the hatchback.

Lugo said the shot couldn’t have been inflicted that way, noting that the state’s chief medical examiner testified the bullet was fired at close range.

“If Britany isn’t being honest with you about that, what else isn’t she telling you?” Lugo said. 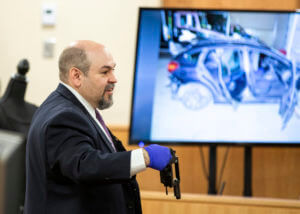 Senior Assistant Attorney General Benjamin Agati delivers the prosecution’s closing statement, showing various pieces of physical evidence and visual aids on screen, during Armando Barron’s murder trial, Thursday, May 26, 2022, in Keene, N.H. A jury on Thursday convicted Barron of first-degree murder for killing his wife’s coworker after he discovered they were texting, and then forcing her to behead him. (Hannah Schroeder/The Sentinel via AP, Pool)

Agati said that Amerault died trying to save himself, moving toward Armando as the shot was fired. He had tried to protect himself when a prior bullet went through his arm and had other defensive wounds on his arms and hands. His feet were close to a machete that was on the floor, and to the car door handles.

“To believe that during that shooting that Jonathan just sat there is not reasonable,” Agati said.

Britany, 33, testified that after Amerault was shot, she was forced to drive the car 200 miles (322 kilometers) north to a remote campsite, with Armando driving right behind her and talking to her on the phone most of the way. There, she said, she was forced to behead Amerault. Her husband eventually left her at the site, telling her to dispose of the body, she testified.

Lugo said Britany is “very capable of lying when she wants to,” noting that when she was approached at the campsite by state Fish and Game Department officers, she told them she was there “clearing her head” following a fight with a girlfriend at a party.

Eventually, the officers noticed something covered by a tarp that turned out to be Amerault’s car. She was detained and brought to police.

“But of course she cooperated at that point,” Lugo said. “She had a story she was selling and she needed them to believe it,” framing herself as the victim.

Agati said the balance that Britany must have had to make, “believing that her own life was forfeit, juxtaposed with her need to get back home to the girls that she had almost literally been dragged away from, the relationship she had been in for 14 years of marriage,” should be considered by the jurors.

The Associated Press had not been naming the couple in order not to identify Britany Barron, who said she suffered extreme abuse. Through her lawyer, she recently agreed to the use of her name.