NASHVILLE, Tenn. (Court TV) — Michael Mosley, the Tennessee man accused of stabbing and killing two men and injuring two others outside a Nashville bar, is set to go on trial Monday, March 28.

Video from inside the Dogwood Bar on December 21, 2019 shows the beginning of an encounter that would end with two people dead and two wounded.

According to investigators, a fight over a woman spilled out of the bar and into the street, where 22-year-old Clayton Beathard and 21-year-old Paul Trapeni were fatally stabbed.

Beathard was a standout college athlete who most recently played for Long Island University in New York. Beathard’s brother, CJ Beathard, plays for the NFL. He’s currently a quarterback for the Jacksonville Jaguars and at the time of his brother’s death, took to Instagram to describe Clayton as having “the biggest heart I have ever known.”

Trapeni was exploring the possibility of attending law school before he died. The third victim, A.J. Bethurum, was injured but survived.

Mosely, who was arrested on Christmas Day, is charged with two counts of first-degree murder, first-degree attempted murder and assault. Prosecutors say Mosely has a lengthy criminal history that includes assault and armed robbery, among other offenses.

In one instance, Mosley was charged with assaulting a woman at a Nashville Walmart in 2017. That attack, in which he could be seen repeatedly kicking and punching the victim, was captured on surveillance video. 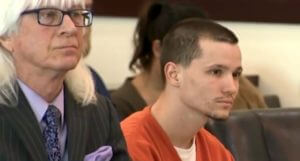 The woman Mosley attacked at Walmart is named Mollie Baker. Baker claims Mosley stabbed her in the eye with a key during the attack. In a bit of a twist to the story — police believe Mosley attacked Baker because she and her husband stand accused of murder in the 2016 shooting death of Mosley’s step-brother.

At the time of the bar fight, Mosley was free on bond, facing criminal charges in connection with the Walmart attack. He has since gone to trial for the attack on Baker; and in fall 2021, Mosley was convicted of criminal attempt to commit aggravated assault and sentenced to 12 years in prison.

Mosley’s defense attorney says his criminal past should not play a role in the murder case against him, and believes video evidence will prove that his client was simply defending himself.

Court TV with bring you live, gavel-to-gavel coverage of the proceedings.