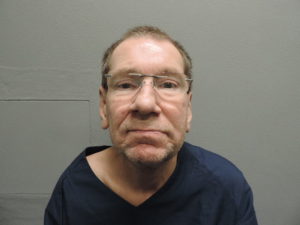 ESCANABA, Mich. (AP) — A 59-year-old Michigan man who told his lawyer that he wanted to rob an Upper Peninsula business so he could return to prison could be locked up for the rest of his life.

Mark Wilson, of Portage, was sentenced Monday to at least 25 years in prison, a sentence that was enhanced because of past convictions. It means he won’t be eligible for parole until he’s in his 80s.

“Somewhere along the road, your honor, I just seemed to have lost the ability to function normally with society,” Wilson told a Delta County judge. “I would like to say to the people that I apologize in the most sincere manner for my behavior” last July.

The Daily Press reports that Wilson gave a note to a Hardee’s employee in Escanaba, indicating that he was robbing the restaurant. Police said he then stayed in the restroom until officers arrived.

Defense attorney Tim Cain said Wilson told him he committed the crime so he could return to prison.

Wilson “tells me he’s happy enough with 25 to 40,” Cain said, referring to 40 years, his maximum sentence.

Wilson’s record shows convictions in Kalamazoo, Genesee and Delta counties, going back to 1983. He was last released from prison in 2012 and completed parole in 2014, the Corrections Department said Thursday.

“When you go back to prison, a place where you’re abundantly familiar with, do your best to be a model citizen within those confines because that will be your world for many years to come,” Judge John Economopoulos said. “Your opportunity at redemption, your opportunity at solace and finding your own wisdom on respect to your path will best be found within the prison system — make the best of it.”