NEW YORK (AP) — The sex-abuse trial of Ghislaine Maxwell was paused Thursday after it was announced that an attorney on the case had gotten sick.

U.S. District Judge Alison Nathan told the jury in Manhattan federal court that an attorney was “ill and has to get care.” She did not identify the attorney, but said there was no reason to believe the illness was related to the coronavirus. 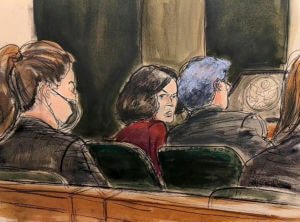 The judge sent jurors home for the day, telling them to expect to return Friday to resume hearing testimony in the trial’s second week.

A spokesperson for prosecutors later said the office will provide an update as to when the trial will resume.

Maxwell, 59, has denied charges she groomed teenagers to give financier Jeffrey Epstein sexual messages at the billionaire’s residences in Florida, New York, New Mexico and elsewhere. Her lawyers have accused prosecutor of making her a scapegoat for sex crimes committed by Epstein, who killed himself in jail in 2019.

The government had been expected to finish presenting its case by the end of the week and the judge suggested that closing arguments in the case might occur on Dec. 20 if the defense presentation next week only lasts a day or two.

Before the trial was abruptly adjourned for the day, jurors did hear a single witness who verified that overnight packages were sent by Jeffrey Epstein to women in December 2002.