FALLS CHURCH, Va. (Court TV) — A Virginia couple who took in the Parkland school shooter’s younger brother is accused of financially exploiting him. 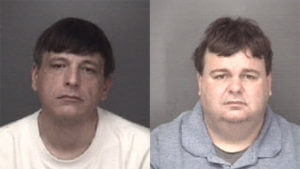 Cruz calls the men his “new family.” Moore was a recurring presence at Nikolas Cruz’s penalty phase in Fort Lauderdale — guard by his side — telling reporters he was there on Zachary Cruz’s behalf to support the defendant. Moore and Zachary Cruz were on the defense witness list, but didn’t get called.

Now, court records say Moore and his husband, Donovan, are accused of defrauding and financially exploiting Cruz as someone with a mental incapacity from April 2019 to April 2020. An Augusta County grand jury indicted the pair on four counts each, including conspiracy. They were arrested Wednesday morning in their Fisherville home and released on $50,000 bond, the Augusta County Sheriff’s Office said.

A lawyer for the three men told Court TV that Moore and Donovan are being targeted with false accusations by county officials who take issue with their local activism — and that Zachary Cruz, who is not mentally incapacitated, vouches for them.

“What they’re saying is … they’re holding [Zachary] against his will and using his money,” lawyer Amina Matheny-Willard said in a phone interview. “The purpose of this was simply to embarrass and harass them.”

Moore, Donovan and another co-defendant are scheduled to be arraigned Friday morning on the following charges:

The arrests are the latest twist in a perplexing subplot of the Parkland school shooter case. Moore told Court TV during the penalty phase that he and his husband invited Zachary Cruz into their home after the younger Cruz was arrested for trespassing on school grounds. They hoped to offer support and refuge, Moore said, but notoriety clouds their relationship.

Moore and Donovan produced a miniseries, “Being Zachary Cruz,” that a prosecutor in Nikolas Cruz’s trial accused of capitalizing on the murders. 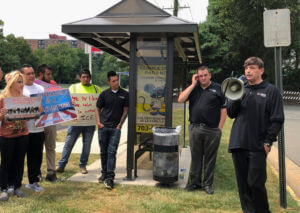 FILE – Nexus Services President Mike Donovan speaks at a rally in Falls Church, Va., on Aug. 15, 2019, to respond to a lawsuit alleging his company charges excessive fees to help detained immigrants obtain bail as they await hearings in immigration court. The head of a Virginia company accused of exploiting immigration detainees has now been charged with defrauding the brother of Florida school shooter Nicholas Cruz. Donovan was arrested on Wednesday, Oct. 5, 2022. (AP Photo/Barakat Matthew, File)

Zachary Cruz issued a statement after he and Moore didn’t get called to testify for his brother. He said he withdrew his decision to voluntarily testify after years of harassment from Broward County. He accused Broward prosecutors of partnering with “a racist Virginia sheriff and a corrupt prosecutor” in an attempt to arrest him, search his home and subject him to a conservatorship. He also accused prosecutors of “attacking” his “new family” for helping him.

The day of Moore and Donovan’s arrest, deputies also searched the offices of their business, Nexus Services, and charged two other men with obstruction.