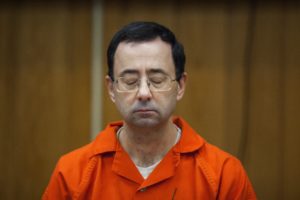 FILE – In this Feb. 5, 2018, file photo, Larry Nassar listens during his sentencing at Eaton County Circuit Court in Charlotte, Mich. Michigan’s attorney general on Wednesday, Dec. 25, 2019, described as “inadvertently misleading” a statement from her communications director this week that her office has suspended a nearly two-year-long criminal investigation into Michigan State University’s handling of complaints against the now-imprisoned serial sexual abuser. Attorney General Dana Nessel said in a written statement Wednesday that the investigation was ongoing. (Cory Morse/The Grand Rapids Press via AP, File)

Attorney General Dana Nessel said in a written statement that the investigation is ongoing.

The probe, which began under Nessel’s predecessor, has resulted in charges against three former school officials. One was convicted. Two others, including former president Lou Anna Simon, were ordered to trial. Their cases will continue to be prosecuted.

“A recent comment from our communications director regarding our department’s investigation … was inadvertently misleading and demands clarification,” Nessel said in the statement. “For the record, I remain deeply committed to finding the truth about who knew what about Larry Nassar at MSU.”

The communications director, Kelly Rossman-McKinney, said Tuesday that investigators wanted the university to waive attorney-client privilege on more than 6,000 documents and that they hope to interview former interim president John Engler, who took over following Simon’s resignation.

Nessel emphasized Wednesday that her office is “at an impasse” with MSU over the documents. She added that “the depth and breadth the university has gone to in withholding those documents only increases our fervor to obtain them.”

“Let me be clear: Despite this impasse, we are committed to continuing to pursue MSU’s role in the Larry Nassar tragedy,” Nessel said in her statement.

In a phone interview with The Associated Press later Wednesday, Rossman-McKinney said she was mistaken to use the word “suspended” in speaking with reporters the day before. She said she should have stressed the deadlock over obtaining the MSU documents.

“At a minimum, I should have used ‘temporarily suspended.’ ‘Impasse’ is more precise,” she said. “It was humbling but an important lesson that words really do matter. … It’s important to get the message straight.”

The attorney general also said her department’s report on the case was “incomplete.”

“We are committed to pursuing the answers to the questions left unanswered in that report,” Nessel said.

The school’s governing board infuriated Nassar victims this year after dropping a promised independent review of sex assaults committed by Nassar, a former campus sports physician who also worked for USA Gymnastics, which trains Olympians.

The trustees deadlocked over releasing the documents, though many now are personally reviewing them. Some said releasing privileged information would jeopardize the university’s lawsuit against insurers to help cover a $500 million payout to hundreds of victims and related legal costs.

Earlier this year, Engler’s lawyer and an attorney in Nessel’s office were at odds over his availability to speak with investigators. The attorney general’s office had wanted to talk to Engler about campus changes after the sex-assault scandal involving Nassar, who molested athletes under the guise of treatment. Engler was interim president for about a year until resigning amid fallout over remarks he made about some victims.

“MSU has cooperated fully with the inquiry, including handing over all facts associated with the case,” university spokeswoman Emily Gerkin Guerrant said in a statement Tuesday.

She said the school has been investigated and reviewed by more than a dozen other entities and governments.

Nassar is effectively serving life in prison for possessing child pornography and sexually assaulting athletes, mostly female gymnasts, at Michigan State and Twistars. Olympians said he also molested them in Texas and overseas.