JEFFERSON CITY, Mo. (AP) — A Missouri man was freed from prison Wednesday after a county prosecutor declined to retry his case, punctuating years of work by WNBA star Maya Moore and other supporters who argued he was falsely convicted of burglary and assault charges.

Moore was on hand when Jonathan Irons, 40, walked out of the Jefferson City Correctional Center. She clapped as Irons approached a group of people waiting for his release. She then dropped to her knees at one point before joining a group hug around Irons.

He had been serving a 50-year prison sentence stemming from the non-fatal shooting of a homeowner in the St. Louis area when Irons was 16. But a judge threw out his convictions in March, citing a series of problems with the case, including a fingerprint report that had not been turned over to Irons’ defense team, according to The New York Times. 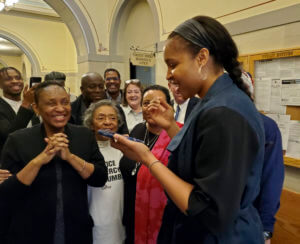 FILE – In this Monday, March 9, 2020, file photo, Jefferson City, Mo., native and WNBA star Maya Moore, right, calls Jonathan Irons as supporters react in Jefferson City after Cole County Judge Dan Green overturned Irons’ convictions in a 1997 burglary and assault case. Moore, a family friend, had supported Irons, sharing his story on a national basis. Irons was freed from prison Wednesday, July 1, 2020, after a county prosecutor declined to retry his case, punctuating years of work by Moore and other supporters who argued he was falsely convicted of burglary and assault charges. (Jeff Haldiman/The Jefferson City News-Tribune via AP, File)

The Missouri attorney general’s office unsuccessfully appealed the judge’s decision, and the lead prosecutor in St. Charles County decided against a retrial.

Moore and Irons became friends after meeting through prison ministry, according to the Times. The 31-year-old Moore, a Jefferson City, Missouri, native who starred at UConn before helping lead Minnesota to four WNBA titles, put her career on hold last season to help Irons.

Moore said in January she planned to sit out a second season and miss the Tokyo Olympics. After Irons’ convictions were thrown out in March, she told the AP her plans hadn’t changed.

“’My decision to take another year was bigger than this case,” she said at the time. “But obviously this case was in the forefront of my mind. I’m looking forward when this is done to finally getting some rest and time with my family.”