KANSAS CITY, Mo. (KSHB) — Keith Carnes said “a chill went up his back” when he received the news of a habeas corpus petition issued by Missouri Supreme Court.

The order, which was issued last week, cleared the way for Carnes to be freed from prison, unless the Jackson County Prosecutor’s Office chose to retry his case.

Last Friday, Jackson County Prosecutor Jean Peters Baker announced her office would be dismissing the charges against Carnes because of insufficient evidence to retry the case.

Carnes, who was released on Monday, had spent nearly two decades in prison for the 2003 murder of Larry White.

“A chill went up my back,” Carnes said. “You know some of these feelings can be overwhelming. You never know how you’re going to react when I finally get free. I’m grateful.”

On Monday afternoon, Carnes spoke with reporters after being freed.

“My prayers have been answered,” Carnes said at the news conference. “It’s been a longtime coming, I’m glad.”

When announcing her office would not retry Carnes’ case, Baker said that the review didn’t establish that Carnes is actually innocent, but rather “because the evidence is also insufficient to prove guilt beyond a reasonable doubt, we cannot retry Carnes.”

To that, Carnes said he will focus his energy on other things.

“As far as the prosecutor, Jean Peters Baker trying to twist things around in a negative way, I’m not even going to entertain that,” he said. 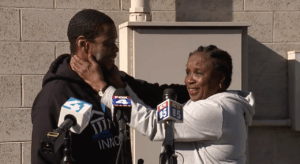 Keith Carnes is embraced by his mother. Carnes was released from a Missouri prison on Monday after serving nearly two decades in prison in the murder of Larry White. (Dale Messing/KSHB)

Instead, Carnes said he looks forward to reconnecting with family and helping others like he has been helped.

He said he plans to stay in touch and get involved with the Miracle of Innocence.

At the press conference, Carnes was embraced by his mother, who said she couldn’t wait to touch his face and hug him.

“I just wanted to kiss my son,” Carnes’ mother said. “I wanted to touch him, it’s been so long since I’ve been able to just hug [him].”

This story was originally published April 11 by KSHB in Kansas City, an E.W. Scripps Company.