PUEBLO, Colo. (KOAA) — The murder trial for Anthony Cuevas begins today in Pueblo on charges he killed his mother and disposed of her body across town in suitcases.

On October 17, 2019, Pueblo police officers found some of the remains for 58-year-old Maria Cuevas-Garcia inside a dumpster.

Security video released later in the day showed a man placing objects into the dumpster outside a car wash on Ivywood Lane. 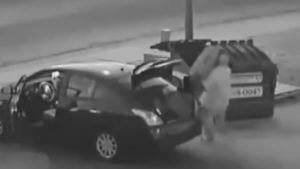 Pueblo Police released this image of a man placing a suitcase in a dumpster after finding a woman’s body inside. (Pueblo Police Department)

As the coroner’s office made a positive identification of the victim, police were also trying to determine the location of the rest of her remains. According to police, Maria Cuevas-Garcia’s head, hands, and feet were removed by her killer. In April 2020, additional remains were found alongside the Arkansas River.

Several days after the body was dumped, 36-year-old Anthony Cuevas and his wife, Melanie, were arrested outside a restaurant. Police charged the son with first-degree murder and for a parole violation. The wife was charged with criminal impersonation.

Detectives believe Cuevas-Garcia was killed inside her own home, where the son was staying following his release from prison.

The victim’s granddaughter, Destia Hamilton, told KOAA in 2019, “She was pretty much the life of our family, she loved to be involved in everything, she was very selfless and helpful.”

Hamilton said she had been living with her grandmother since 2015, but moved out when her uncle moved into the home. “For him to do this after she was willing to open her home to him and feed him and his wife, you know, it just doesn’t make any sense,” said Hamilton.

This story was originally published June 6, 2021, by KOAA in Colorado Springs.