DENVER (KOAA) — The booming world of true crime is helping keep a dark online marketplace alive and raising disturbing questions about morbid mementos allegedly from notorious killers that are up for sale, including items from Colorado murderers that have led the state to open an investigation. 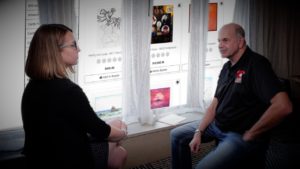 Victim advocate Andy Kahan is on a mission to dismantle the so-called “murderabilia” industry. (KMGH)

Andy Kahan is a Victim Advocate with Crime Stoppers based in Houston. He’s on a mission to dismantle what he’s labeled the “murderabilia” industry.

“Like it or not, there are groups of people out here who idolize high-profile killers,” said Kahan.

There are a handful of online sites that sell the items, which include personal belongings like Charles Manson’s hair, handwritten prison letters from killers, artwork and more.

Several of the items have ties to Colorado, including a letter from infamous killer Christopher Watts, who murdered his family in 2018.

“There is absolutely nothing more nauseating and disgusting when you find out the person who murdered one of your loved ones now has items being hawked by third parties for pure profit,” said Kahan. 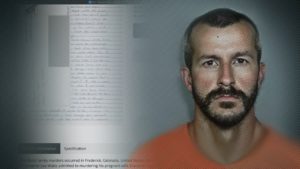 A letter from infamous killer Christopher Watts, who murdered his family in 2018. (KMGH)

Kahan said that often, murderers have no idea their belongings are up for sale on the third-party sites. And in some cases, he thinks convicted killers are profiting from the sales. Kahan also told Denver7 Investigates the items likely leave the prison system through U.S. Mail.

“I’m fairly confident that Colorado prison officials have no idea that this stuff is going on,” said Kahan.

William Harder runs Murderauction.com and makes his living selling items from high-profile killers. He considers himself both an entrepreneur and a collector.

“This is America. And there’s an old saying: Don’t like it, don’t buy it,” Harder said. “The public interest is created by the media in the news, and then I capitalize on that by people wanting to go a step further.”

When asked about the ethics of his site, Harder responded: “I don’t feel I have any need to apologize. Apologize? Apologize for what? For collecting items that I want to have. And when we start banning things, where do we draw the line?”

Murderabilia sites also take a toll on victims whose loved ones died at the hands of these killers.

Tom Sullivan lost his son, Alex, in the Aurora theater shooting. Handwritten letters from his son’s killer are up for sale. One website listed a letter from James Holmes for $650 and described it as “quite rare” and “highly sought after.”

“I’m kind of mystified,” said Sullivan. “It’s like, really? Okay, so who’s making the money and where’s it going? And, you know, is there a way to stop this?” 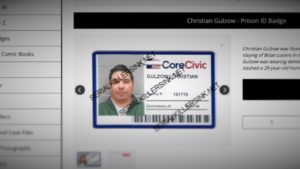 Christian Guzlow’s prison badge. Guzlow slashed a man to death with Freddy Krueger-style gloves in a parking lot in 2017. (KMGH)

Denver7 Investigates scraped through these “murderabilia” websites and discovered a Colorado prison ID up for sale for $350, an autographed prison t-shirt, and handprints all from Colorado murderer Christian Guzlow.

“Another unusual item are his handprints. [It] leads me to the inclination that he is acutely aware that his stuff is being sold and perhaps he is receiving some of the proceeds,” said Kahan.

Christian Guzlow slashed a man experiencing homelessness to death with Freddy Krueger-style gloves in a restaurant parking lot in 2017. Guzlow was known to wear a demonic clown costume and was a death metal singer. His notoriety is helping fuel demand for contraband from Colorado’s state prison.

Kahan weighed in on how these items left the confines of prison walls.

“You had to get that out from Point A to Point B. How did that happen? After your story airs, they will clamp down,” he said.

In response to Denver7 Investigates’ reporting, the Colorado Department of Corrections said in a statement: “We find it abhorrent that anyone would attempt to profit off of these types of items. The information has been forwarded to our Inspector General’s Office for an investigation into when and how these items left a facility.”

DOC also said T-shirts and ID cards would not be authorized for an inmate to send out of a facility.

Denver7 Investigates also did more research into how the muderabilia industry is legally allowed to operate. Laws known as “Son of Sam” laws are intended to prevent killers from commercially profiting off of their crimes.

But those laws only stop murderers from writing shows or books, not selling personal items. Many courts in various states have also ruled that “Son of Sam” laws are unconstitutional, because of the First Amendment.

Putting an end to murderabilia will likely need to come at the federal level, experts said. Two U.S. senators have presented legislation in the past, but the bills have failed to make it out of committee.

This story was originally published Sept. 27, 2022 by KOAA in Colorado Springs, an E.W. Scripps Company.