ALBANY, N.Y. (AP) — New York on Thursday became the latest state to ban the sale of cats, dogs and rabbits in pet stores in an attempt to target commercial breeding operations decried by critics as “puppy mills.”

The new law, which was signed by Gov. Kathy Hochul and takes effect in 2024, lets pet shops work instead with shelters to offer rescued or abandoned animals up for adoption. It will also ban breeders from selling more than nine animals a year. 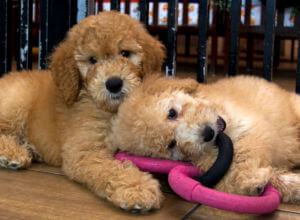 FILE – Puppies play in a cage at a pet store in Columbia, Md., Aug. 26, 2019. New York has become the latest state to ban the sale of cats, dogs, and rabbits in pet stores in an attempt to target commercial breeding operations decried by critics as “puppy mills.” The new law, signed by Gov. Kathy Hochul on Thursday, Dec. 15, 2022, will take effect in 2024. (AP Photo/Jose Luis Magana, File)

“This is a very big deal. New York tends to be a big purchaser and profiteer of these mills, and we are trying to cut off the demand at a retail level,” said Sen. Michael Gianaris, a Democrat.

He added that the puppy mill industry treats animals “like commodities” and said “there is no pet store not affected.”

Pet shops have argued that the law will do nothing to shut down out-of-state breeders or increase their standards of care and said it would result in the closures of the dozens of pet stores remaining in New York.

California enacted a similar law in 2017, becoming the first state to ban such sales. While that law requires pet stores to work with animal shelters or rescue operations, like New York is doing now, it does not regulate sales by private breeders.

A handful of states followed. In 2020, Maryland banned the sale of cats and dogs in pet stores, triggering pushback from shop owners and breeders who challenged the measure in court. A year later Illinois barred pet shops from selling commercially raised puppies and kittens.

In New York, pet advocacy groups have long called for a full shutdown of facilities that raise and sell animals for profit, saying animals are raised in inhumane conditions before they are shipped off to stores.

Emilio Ortiz, a manager at Citipups pet shop in New York City, said the new law could serve as a death sentence for the business he’s worked at for more than a decade.

“Ninety percent of our business is selling dogs. We’re not going to survive this,” said Ortiz, who considers the ban unfair to stores that work with responsible breeders. “They’re closing the good actors along with the bad actors.” 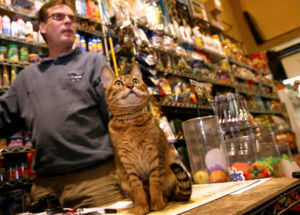 FILE – Ed Frerotte, of Petqua pet store, and the store cat Frankie stand at the counter on May 22, 2008, in New York. New York has become the latest state to ban the sale of cats, dogs, and rabbits in pet stores in an attempt to target commercial breeding operations decried by critics as “puppy mills.” The new law, signed by Gov. Kathy Hochul on Thursday, Dec. 15, 2022, will take effect in 2024. (AP Photo/Diane Bondareff, File)

Jessica Selmer, president of People United to Protect Pet Integrity, a New York coalition of pet store owners, called the law “careless” and “counterproductive” and said she hopes the governor will “consider legislative remedies to some of the pitfalls of the bill.”

The new law will not affect at-home breeders who sell animals born and raised on their property.

Lisa Haney, who breeds dogs at her Buffalo home alongside her husband, said she supports the law.

“One pet store near me, they get dogs from all over the Midwest and different large facilities, and you have no idea where they come from and who the breeder is. People are really clueless and take the puppy,” Haney said.

Her business, Cavapoo Kennels, partly focuses on breeding hypoallergenic dogs for people who have allergies, and her business model operates on a need basis. The waitlist runs from six to 12 months, ensuring each dog ends up in a home.

Gianaris said the law will allow buyers to be more conscious of where their pets come from.

“If a consumer went to a mill and saw the awful conditions, they wouldn’t buy these animals,” he said. “Dealing with a breeder allows people to see where their dog comes from, and it cuts off the middlemen that serve as a way to wash off the awful activities that take place at the mill.”