Authorities say they received a call about a driver asleep inside a vehicle parked on an exit ramp of a parking garage located in the 3500 block of South Las Vegas Boulevard, near Flamingo Road, at about 4:10 a.m. local time.

Arriving officers made contact with the driver, later identified as 22-year-old Hobbs. 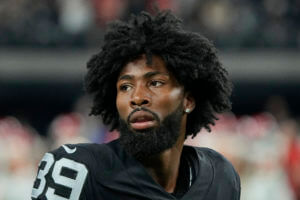 FILE – Las Vegas Raiders cornerback Nate Hobbs warms up before an NFL football game against the Kansas City Chiefs, Nov. 14, 2021, in Las Vegas. Hobbs was arrested on a misdemeanor DUI charge shortly after the team returned from a road game in Indianapolis. The Las Vegas Metropolitan Police Department said in a statement Monday, Jan. 3, 2022, that dispatch received a call at about 4 a.m. about a driver asleep inside a vehicle parked on an exit ramp of a parking garage. (AP Photo/Rick Scuteri, File)

Police report Hobbs was given a field sobriety test by patrol officers and failed. Hobbs was then transported to the Clark County Detention Center, where he was booked for DUI, a misdemeanor charge.

Attorneys representing Hobbs issued a statement Monday afternoon in which they expressed “serious concerns” that the alleged circumstances of the arrest don’t qualify as DUI. Attorneys David Z. Chesnoff and Richard A. Schonfeld issued the following statement:

“The facts and circumstances related by the Las Vegas Metropolitan Police Department to the news media leave serious concerns that this does not qualify as a DUI under Nevada law.”

In a press conference on Monday, interim head coach Rich Bisaccia said he and the organization were trying to collect as much information as possible on what happened before commenting further.

“I don’t have all the information on that, but I feel good about saying they (the players) have been hit over the face with distractions and things of that nature,” Bisaccia said in response to a question about the team’s handling of off-the-field issues.

“We’re very cognizant of the city in which we live,” Bisaccia continued, “so I’ll leave it at that and we’ll see what it looks like by the end of the week.”

The Raiders face the Los Angeles Chargers this Sunday at Allegiant Stadium with a playoff berth on the line.

This story was originally published Jan. 3, 2022, by KTNV in Las Vegas, an E.W. Scripps Company.