The complete trial of Nevada v. O.J Simpson and C.J. Stewart (2008) is now available in the Trials on Demand section of CourtTV.com. Click here to go to the trial page.

O.J. Simpson was accused of rounding up five men, most with lengthy criminal records, and bursting into a Las Vegas hotel room to steal a trove of sports memorabilia from two collectibles dealers. 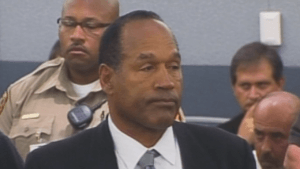 In, 2008, O.J. Simpson is accused of rounding up five men, and bursting into a Las Vegas hotel room to steal a trove of sports memorabilia from two collectibles dealers.(COURT TV)

From 2007-2008 the criminal case against Simpson ensued. Simpson’s lawyers argued that he was trying to retrieve personal keepsakes that had been stolen from his home, and that he did not know that two of the five men had carried or displayed guns. 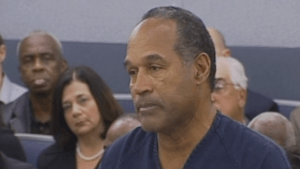 O.J. Simpson awaits sentencing in the 2008 trial where he was accused of stealing sports memorabilia from a Las Vegas hotel. (COURT TV)

The trial featured testimony from four of Simpson’s five accomplices, who had accepted plea deals in exchange for their testimony.  The key evidence against Simpson and Clarence Stewart was hours of surreptitious audio recordings of the planning, execution and aftermath of the incident. Simpson was found guilty of a dozen charges including two counts of kidnapping with a deadly weapon, robbery, burglary, conspiracy, assault and coercion.

On October 3, 2008 – 13 years to the day after Simpson was acquitted of the murders of his ex-wife, Nicole Brown and Ronald Goldman – Simpson was found guilty of all 12 charges.