FORT LAUDERDALE, Fla. (AP) — Attorneys for Florida school shooter Nikolas Cruz and his prosecutors argued vociferously Wednesday over whether the jurors who will decide whether he is sentenced to death should be allowed to tour the blood-stained, bullet-pocked classroom building where he murdered 17 people four years ago.

Prosecutors told Circuit Judge Elizabeth Scherer that the jurors need to see the path Cruz, 23, took through the three-story building at Marjory Stoneman Douglas High School in Parkland on Feb. 14, 2018, to understand the carnage he unleashed as he walked methodically floor-to-floor, firing his semi-automatic rifle as he went. Shortly after the shooting, the building was fenced off and sealed — the dried blood, Valentine’s Day gifts and bullet holes still in place. 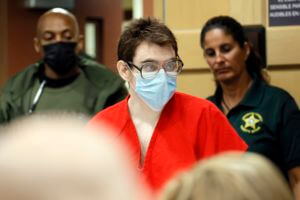 Nikolas Cruz enters the courtroom for a hearing at the Broward County Courthouse in Fort Lauderdale, Fla., on Wednesday, March 29, 2022. Cruz previously plead guilty to all 17 counts of premeditated murder and 17 counts of attempted murder in the 2018 shootings at Marjory Stoneman Douglas High School . (Amy Beth Bennett/South Florida Sun-Sentinel via AP, Pool)

Cruz’s attorneys argued that the jurors will already see extensive and gruesome security video of the shooting, crime scene video and photos taken immediately after the shooting and hear testimony about the building. They said the prosecution’s only desire is to inflame the jurors’ passions and get them to vote with their emotions, not their intellect.

Cruz pleaded guilty in October to murdering 14 students and three staff members, and to the charge of attempted murder for 17 people who were wounded. Jury selection is scheduled to begin Monday for a monthslong penalty trial that will determine whether the former Stoneman Douglas student receives a death sentence or life without parole. Scherer previously ruled that jurors could tour the building, but that was before Cruz’s guilty plea. The defense said the plea eliminated the need to tour the building because prosecutors no longer had to prove his guilt.

The trial will decide whether the aggravating factors of the killings — the multiple deaths, the planning, the cruelty — outweigh mitigating factors such as Cruz’s lifelong mental and emotional problems and the death of his parents.

Juries don’t typically tour crime scenes, but either side can request it if it believes a visit would help the members better understand the case. It is up to the judge to decide if they visit.

Melisa McNeill, Cruz’s lead public defender, told Scherer that the building is no longer an accurate representation of what happened because the Broward Sheriff’s Office removed personal items without fully logging and photographing them. She gave the court a video her office produced that would show what Cruz saw as he walked the halls, but removes all the blood, Valentine’s gifts and other crime scene material. She said showing the jurors that would be a better alternative.

“If the purpose of running the jury to the crime scene is so that they can view the area Mr. Cruz walked, the path that he took, that can be done with a sanitized crime scene, if that is truly their (the prosecution’s) intention,” McNeill said. The jurors “don’t need to see all of the horrible things.”

But assistant prosecutor Carolyn McCann told Scherer that no evidence can replace seeing “the carnage” left behind in the school building. Cruz chose to shoot people in the building, she said. He chose to carry out his attack on Valentine’s Day. If a tour of the building evokes strong emotions, it was Cruz’s own doing, she argued.

“There is no one video, photograph, poster, film, anything, that captures what the … building is,” McCann said. “The jury has to know the footsteps, the distance, the perspective, the visual acuity the defendant had to have.”

Scherer said she would rule soon.

The building, which rises above the Stoneman Douglas campus, has been a grim, daily reminder of the shooting for students, staff and parents. The Broward County school district plans to demolish it after the trial.