FORT LAUDERDALE, Fla. (AP) — Few Americans outside law enforcement and government ever see the most graphic videos or photos from the nation’s worst mass shootings — in most states, such evidence is only displayed at trial and most such killers die during or immediately after their attacks. They never make it to court.

That has made the penalty trial of Florida school shooter Nikolas Cruz for his 2018 murder of 17 people at Parkland’s Marjory Stoneman Douglas High School unusual.

As the worst U.S. mass shooting to reach trial, the surveillance videos taken during his attack and the crime scene and autopsy photos that show its horrific aftermath are being seen by jurors on shielded video screens and, after each day’s court session, shown to a small group of journalists. But they are not shown in the gallery, where parents and spouses sit, or to the general public watching on TV.

Some online believe that should change — that to have an informed debate on gun violence, the public should see the carnage mass shooters like Cruz cause, often with high-velocity bullets fired from AR-15 semiautomatic rifles and similar weapons.

Others disagree. They say the public display of such videos and photos would add to the harm the victims’ families already endure and might entice some who are mentally disturbed to commit their own mass shooting. They believe such evidence should remain sealed. 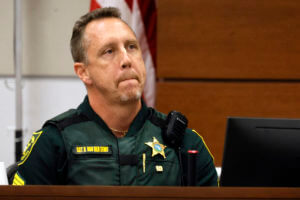 Broward Sheriff’s Office Sgt. Richard Van Der Eems describes the scene he encountered at the school after the mass shooting as he testifies during the penalty phase trial of Marjory Stoneman Douglas High School shooter Nikolas Cruz, Friday, July 22, 2022, at the Broward County Courthouse in Fort Lauderdale, Fla. Cruz previously plead guilty to all 17 counts of premeditated murder and 17 counts of attempted murder in the 2018 shootings. (Mike Stocker/South Florida Sun-Sentinel via AP, Pool)

Liz Dunning, a vice president at the Brady Center to Prevent Gun Violence, doesn’t believe releasing such videos and photos would have the political impact some think. Polls show that most Americans already support stronger background checks for gun buyers and bans or restrictions on AR-15s and similar weapons, said Dunning, whose mother was murdered by a gunman.

“Public perception is not the issue,” Dunning said. “We should be asking more of the powerful.”

Since most of the worst U.S. mass shooters were killed by themselves or police during or immediately after their attack, it is rare for anyone outside government to see such surveillance videos or police and autopsy photos. The public didn’t see such evidence after the Las Vegas shooting in 2017, Orlando in 2016, Sandy Hook in 2012, Virginia Tech in 2007 and others.

But Cruz, 23, fled after his shooting and was arrested an hour later. He pleaded guilty in October to 17 counts of first-degree murder – his trial is only to determine if he is sentenced to death or life without parole. The videos and photos are part of the prosecution’s case.

Since the trial began July 18, everyone in the courtroom and watching on TV has seen and heard heartbreaking testimony from teachers and students who saw others die. They have heard the gunshots and screams as jurors watched cellphone videos. 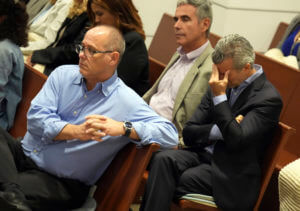 But when graphic videos and photos are presented, those are not shown. Usually, they only hear medical examiners and police officers give emotionless descriptions of what the jury is seeing.

Then at the end of each day, a group of reporters reviews the photos and videos, but are only allowed to write descriptions. That was a compromise as some parents feared photos of their dead children would be posted online and wanted no media access.

Miami media attorney Thomas Julin said in Florida before the internet, any photos or other evidence presented at trial could be seen and copied by anyone. Newspapers didn’t print the most gruesome photos, so no one cared.

But in the mid-1990s as the internet boomed, Danny Rolling faced a death penalty trial for the serial murders of four University of Florida students and a community college student. The victims’ families argued that the publication of crime scene photos would cause them emotional harm. The judge ruled that anyone could view the photos, but no one could copy them. Such compromises have since become standard in Florida’s high-profile murder trials.

The surveillance video of the Stoneman Douglas shooting is silent. It shows Cruz moving methodically from floor-to-floor in a three-story classroom building, shooting down hallways and into classrooms. Victims fall. Cruz often stops and shoots them again before moving on.

The crime scene photos show the dead where they fell, sometimes on top of or next to each other, often in contorted shapes. Blood and sometimes brain matter are splattered on floors and walls.

The autopsy photos show the damage Cruz and his bullets did. Some victims have massive head wounds. One student had his elbow blown off, another had her shoulder blown open. Another had most of her forearm ripped away.

Yet, despite their gruesomeness, Columbia University journalism professor Bruce Shapiro says most autopsy and crime scene photos wouldn’t have a lasting public impact because they don’t have context.

The photos and videos that have a strong effect on public opinion tell a story, said Shapiro, who runs the university’s think tank on how journalists should cover violence. 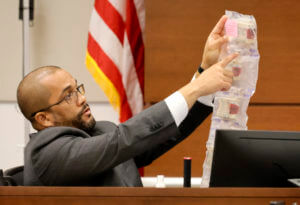 BSO crime scene detective Miguel Suarez points to bullet casings collected at the scene of the shooting as he testifies in the penalty phase of Marjory Stoneman Douglas High School shooter Nikolas Cruz’s trial at the Broward County Courthouse in Fort Lauderdale, Fla., on Monday, July 25, 2022. Cruz previously plead guilty to all 17 counts of premeditated murder and 17 counts of attempted murder in the 2018 shootings. (Carline Jean/South Florida Sun-Sentinel via AP, Pool)

The photos of Emmett Till’s battered body lying in its coffin after the Black teenager was tortured and killed by Mississippi white supremacists in 1955. Mary Ann Vecchio screaming over Kent State student Jeffrey Miller’s body after he was shot by National Guard troops in 1970. Vietnamese child Phan Thi Kim Phuc running naked after being burned by a napalm bomb in 1972. The video of police officer Derek Chauvin kneeling on George Floyd’s neck until he’s dead in 2020.

And even if the graphic photos and videos were released, most major newspapers, wire services and television stations would be hesitant to use them. Their editors weigh whether the public benefit of seeing an image outweighs any prurient interest — and they usually pass.

That would leave most for only the most salacious websites. They would also become fodder for potential mass shooters, who frequently research past killers. Cruz did; testimony showed he spent the seven months before his attack making hundreds of computer searches about committing massacres.

“The images of the carnage will become part of their dark fantasy life,” Shapiro said.